THE BIG BANG OF NUMBERS. How to build the universe using only maths, by Manil Suri (Bloomsbury, 2022) – a review by Henri Laurie 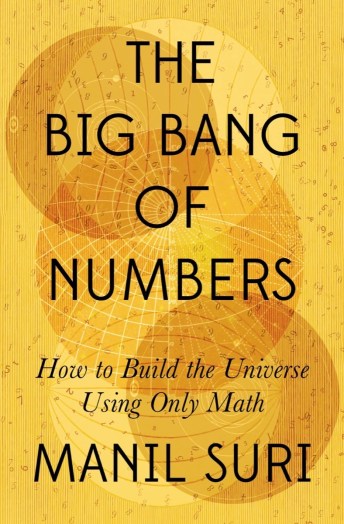 Oh no. Not another overview of mathematics, for “everyone”. Set theory, numbers from natural to complex, geometry, algebra. Axiomatics. Gödel. Infinity. Applications. Philosophy??

Isn’t this all a big yawn? Hasn’t this been done again and again? For example by Lancelot Hogben, Eric Temple Bell, Reuben Hersch (and that’s just off the top of my head)?

Not at all, as it turns out. Suri has a marvellous new angle, one that allows him to bypass almost everything those authors wrote about. There is nary a formula or a figure or a proof (except for the endnotes), nor much about big names or history or the various  fields of mathematics.

Instead, there is an emphasis on *ideas* and on pursuing them wherever they may lead. Indeed, Suri gives us mathematics as the passionate pursuit of meaning, as engrossing as physics or music.

The conceit he uses is that one can design a universe very like ours starting from nothing – that is, from the empty set. He uses the term but leaves it undefined, so that the reader interprets it as they wish. The Void, simple absence, a mere name, whatever nothingness means to them. From this starting point, the whole sequence of ideas is developed. Naming his book “The Big Bang of Numbers” is a playful reference to physics, but also a serious reminder that the universe he aims to design has a single, unique origin.

He chooses as companion the pope, a benign competitor for our attention when it comes to passionate investigation of meaning, especially the deep questions. The pope gets a mention, somewhat tongue in cheek, whenever he stands back a bit and acknowledges some everyday context.

It all works remarkably well. The mathematics emerges from simple ideas that in themselves need not be mathematical: he starts with nothingness, and then identifies it with the empty set. He appeals to creatio ex nihilo for creating a set that contains the empty set. The numbers zero and one, in other words. So he parallels the pope’s Creator of the world with the creation of numbers by you, the reader, in cahoots with the author. And of course the big bang of standard cosmology is also a case of creatio ex nihilo, so it links with physics also.

He manages to connect this basic step with those big ideas in a very charming way. It’s up to you to follow him as the natural numbers are created all the way out to infinity (an idea that will come up again and again, right to the conclusion of the book). He discusses addition, and gives the numbers agency to play what he calls “the addition game”, which leads easily to the “multiplication game” and the “subtraction game”. But then some subtractions don’t work, so (creatio ex nihilo again) the integers come into being. Similarly, the “division game” leads to creation of the rational numbers. Powers are next, and of course roots, which leads to the complex numbers.

This is Day One: creatio ex nihilo again and again, playful numbers, they’re even given characters (zero is thoughtful, one is bustlingly active), the operations become activities the numbers like to perform.

Day Two gives geometry (complex numbers play a starring role), and by focussing on what sort of geometry one could build from only numbers, he manages to introduce dimensions, length and non-Euclidean geometry (although he avoids the term). Charmingly, curved space is illustrated via crochet models (he mentions the Crochet Coral Reef, see https://crochetcoralreef.org/about/theproject/).

Day Three introduces the contractor that will turn the design into an actual universe. This contractor is called Nature and presented as female (looking very like a Greek goddess, in fact), though he explicitly says this is mere fancy. What he does insist on is that something outside the mathematics being created would be necessary to go from specifying a universe to building one.

What I found most interesting about Suri’s “Nature” is the need for the designer (who is free to play mathematically) to convey the design to the contractor (who needs to carry out the design, and has to cope with all sorts of practical diffulties). This brings in algebra, and thereby algebra turns from dull manipulation of formulae into an absolutely essential medium of communication, and very much part of this particular approach to big and passionate questions.

Day Three was more interesting to me than the first two—in them the playfulness was entertaining, but the sequence entirely predictable (except for the way complex numbers provided the second geometric dimension, that was lovely). Nature as the practical constructor provides a fresh take on applied versus pure mathematics (without needing those terms), and what I especially liked was that Nature worked to low precision, but also made use of randomness, which in turn was available because of the infinitely long decimal expansions of irrational numbers. That is, by NOT mentioning the applied/real dichotomy, Suri gives both of them an essential role.

Days Four to Six are about “Patterns”, “Physics” and “Infinity”. Again, the actual mathematical content has no surprises, but the presentation is accessible, entertaining and thought-provoking.

Finally, Day Seven arrives—and what actually happens is left to the reader. Suri gives many suggestions about how the reader might imagine a universe unfolding, but admits that producing a world very like ours is vanishingly unlikely. He mentions some attempts overcome this divide, without taking sides. This open-endedness is entirely consistent with the playful and investigative presentation up to that point.

I very much liked this book. I hope so do you!