The best writing on Mathematics, 2021, Edited by Mircea Pitici – a review 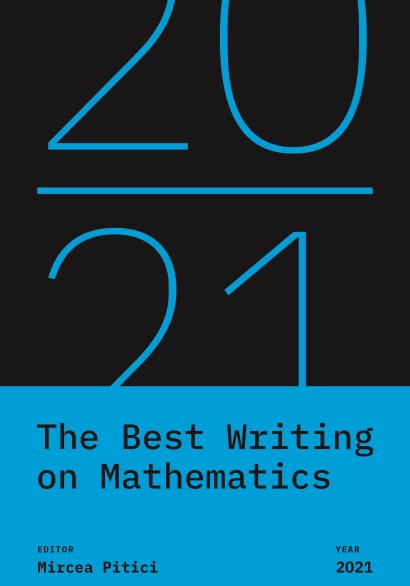 I’ve been reading this series every year now for the last five years or so, and it never disappoints. Mircea does an amazing job each time at collecting such a diverse ideas, voices, and areas of mathematics, that I usually find the vast majority of them to be exceptional. This year is no different.

The book came out during Covid, and rather aptly starts off talking about the effects on mathematicians of involuntary confinement of one form or another. In fact the very first chapter talks of the work of Poncelet, who was involved in Napoleon’s failed campaign, and subsequently imprisoned in Russia, and of his teacher’s Monge, who studied aspects of projective geometry. It just so happened that the diagram of Monge’s published in the essay was precisely what I had needed for a particular problem that I was working on (though in higher dimensions). Such fortuitousness does not come along frequently, and bode well for the rest of the book, which I read on a bit of a high from this chance discovery.

The next essay is on another topic du jour, that of cryptocurrencies and gives a pretty well-rounded introduction to the mathematics of blockchains, hashing functions, smart contracts and concensus mechanisms. It doesn’t go into the depths of the mathematics in this case, but it gives enough to get a general sense of how these technologies work.

From cryptocurrencies to architectural mathematics, or mathematical architecture, to mathematically defined typefaces through to crochet’d manifolds, 3d printing of interesting surfaces in dynamical systems to geology, the next few chapters covers a wide variety of the most applied of mathematics topics. The discussion of algebraic geometry in the essay on typefaces was particularly interesting and gave me some bifurcation problems which I later gave to my first year class.

Things turn after this to the computer science side of applied maths, with quantum computing, and data, both of the dark and of the imperfect varieties, and how we need to treat these important topics in an ever more data-driven world.

It’s after these essays that things become more pure mathematical with some logical gymnastics of John Conway et al. in a game that I am still trying to ponder.

It is slightly later on, in a chapter that I was rather expecting to dismiss that I actually found the most thought-provoking material. this was in an essay by Natalie Wolchover on Gisin’s work on the application of intuitionist mathematics (mathematics without the infinities) to physics problems, and the possibility that information theory, and the very concept of time need to be rewritten in a universe where infinity is simply forbidden. This has so many consequences, and ties in in interesting ways Rebecca Goldstein’s book on Godel’s Incompleteness Theorem, which I have also just read and thoroughly enjoyed. This essay has taken me down a bit of a rabbit hole of reading Gisin’s papers, and indeed this is precisely what a book like this should do. It should give one just the little morsel of an idea which the reader can then explore in the wealth of material out there.

One of the other reasons that I particularly like Mircea’s collections is because they always contain essays on mathematics education, and this time it includes one on tips for supervising undergraduate student research projects. This is something that one has to think very carefully about when thinking of appropriate topics, and of finding the right ways to guide students. These are just the sorts of topics which we as mathematicians and academics should be sharing with one another, beyond the mathematics itself.

Overall, as always, Mircea has put together a fine collection of writing on mathematics, and I would recommend this for anyone who wants a dip in the waters of a large array of mathematical topics, and isn’t scared of getting sucked into the odd rabbit hole or two.