In this post we will have a look at Parrondos paradox. In a paper* entitled “Information Entropy and Parrondo’s Discrete-Time Ratchet”** the authors demonstrate a situation where, by switching between 2 losing strategies, we can create a winning strategy.

The setup to this paradox is as follows:

We have 2 games that we can play – if we win we get 1 unit of wealth, if we lose, it costs 1 unit of wealth. Game A gives us a payout of 1 with a probability of slightly less than 0.5. Clearly if we play this game for long enough we will end up losing.

Now, we have 2 losing games – how do we win? By switching between playing Game A and Game B.

We now simulate playing each of the games we have described above (i.e. A and B) as well as a couple of strategies for switching between them. The graphs below show the histograms of the results of 1000 gambles of length 50000 (i.e. 1000 different examples of playing the each game for 50000 discrete time steps) for each strategy. We have specified the parameters of the games as per the original paper:

is the probability of winning for Game A and

are the probabilities of winning when our winnings are multiple a multiple of 3 or not, respectively, when playing Game B. We start our wealth on 99 and run the simulations below. 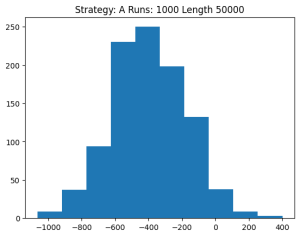 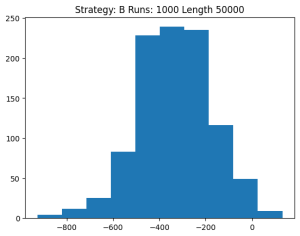 As can be seen, these lose on most occasions (if we let the game go on for long enough we will always lose).

Now, what if we switch between the strategies according to a specified pattern? And what if we play each game with a probability of 50%? 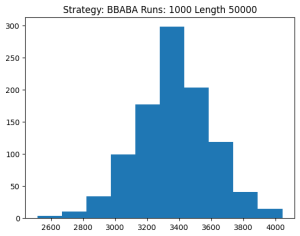 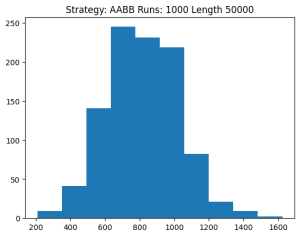 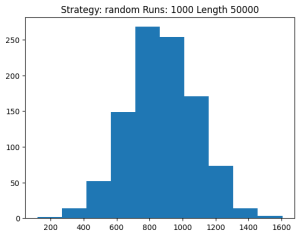 As can be seen these win on most occasions. So by switching between games we have managed to turn a combination of 2 losing strategies into a winning one. This doesn’t work for all switching strategies, however. Consider the extreme case of playing Game A 99999 times in a row and then playing Game B once – this is too close to Game A to allow the effect of playing Game B to have an impact. What is especially surprising is that the strategy of switching randomly is a winning game. The following section will give an explanation, using Markov Chains, as to why Game B is losing but switching randomly between Game A and Game B is not.

Now that we have seen this phenomenon at work, lets have a look at a bit of the maths.

. But this is more than 0.5! Intuitively, the strategy should be a winning one. But this is not the case. We saw this through the simulations above.

. To show that this strategy is losing we can use a Markov Chain***.

Assuming we start at a point where our wealth is a multiple of 3, it suffices to show that if we lose 3 units of wealth before we gain 3 (probabilistically speaking), the game is losing in general. This is because if we start at a multiple of 3 and get down to a lower multiple of 3 more often than we get up to a multiple of 3 (i.e. back to the same situation in terms of the gamble taken but with less wealth) we can see this as losing. The Markov Property**** is used here for this to hold. We can use the Markov chain below to represent this situation – we start at 0 (which can be seen as any multiple of 3) and move to 1 with probability

and to -1 with probability

. In any other situation we move up with

Now, we can work out our probabilities as follows: let

be the probability of reaching state 3 from state j. We derive the following system of equations:

Markov Chain for Game B

Now, these probabilities are all defined with reference to one another, and this is a solvable set of equations. We are most interested in

as this is the one that will tell us whether we expected to win on average or not. To get some intuition into how these work, lets consider

, the probability that we win 3 before losing 3 given that we have lost 1 already: we can see the expression:

is a weighted sum of the probabilities

, weighted by the probabilities of moving to those states. That is to say, if we are 1 unit of currency down and win (with probability

), we then move to 0 units of currency and then we have the probability,

of winning 3 before losing 3. We apply the same logic if we lose and to all of the remaining states.

. The expression we get is:

Alright, now that we know that A is a losing game and we have convinced ourselves that B is a losing game, we can have a look at one of the strategies that we simulated above: randomly switching between A and B.

Markov Chain for Switching randomly between A and B

We will use pretty much the same method as above, to show this, so all we need to do is find

We can use the same formula for

above to get, for randomly switching between A and B:

Since this is greater than 0.5 we now have a winning game!

This counterintuitive yet useful phenomenon has applications in engineer, biology and financial risk management. We have shown how it works with simulations and given an argument as to how randomly switching between losing games can create a winning one.