I recently received a message from a friend and the heading of the post perfectly describes what was said to me. Thereafter, an interesting integration question was sent to me. It read as follows:

I must admit, it does look quiet scary. My immediate thought was that some sort of substitution was required but I really had no idea as to where and how this should be done. Two pages and a headache later, I thought to myself why don’t I get a rough idea of what the answer should look like. Once again, let’s start approximating things (as it turns out, my approximation gets me the absolutely correct answer).

I looked at the integration bounds and noted that the point x = 3 was in fact the midpoint. I then decided to construct a Taylor polynomial for the above function around the point x = 3. It was done as follows:

You might be wondering why I didn’t bother taking anymore derivatives.…

The least preferred, but maybe the most understandable way of approximating π

? I assume this is the question on everyone’s mind. (Whether you’re a Math lover or not)

The simple answer would be that we all love pie, now don’t we?

Before I begin discussing any technicalities, I’d like to acknowledge that it is possible for some of us to find the concepts easy whilst others might struggle with them. This is the reason why I’m choosing to speak in a very simple and understandable manner. (I’m baby proofing my post!)

Firstly, let us have a look at the Maclaurin series of

Aside: A Maclaurin series is a polynomial which approximates a function around the point x = 0. The level of accuracy decreases as you move further away from x = 0. The only way to get an exact answer and not an approximate is to let the sum go to infinity.

Below is a table of the first few derivatives of

Essentially, the entire theory of electromagnetism can be found in the following four equations: 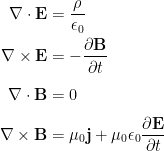 These are Maxwell’s Equations in differential form, not in integral form, which is the way they are often introduced. I will discuss them in this form, however, as I believe the differential equations convey more elegantly their physical meaning straight from the mathematics. Let’s get started.

If you ever did high school physics, you should have some idea of what electric and magnetic fields are. Below is an example of each (depicted using field lines):

What these field lines show is the direction of the respective fields at each location (indicated by arrows) as well as their relative strengths (indicated by density of field lines). So what are these fields actually representing? Well, for electric fields, this shows you the direction an object with a positive electric charge would be forced, while a negatively charged object would feel a force in the opposite direction.…