I wanted to put up a little summary of some of the most important things to remember from the end of last semester. There was a sudden input of new concepts, so let’s put some of them down here to get a clear reminder of what we need to know. A few things in this post:

An antiderivative of a function

on an open interval

Note that we say an antiderivative, not the antiderivative. There can be many functions whose derivatives give the same thing. While we know that:

is an antiderivative of

is also an antiderivative of

. In fact for any constant

it is true that

is an antiderivative of

. We will come up with some clever notation for the antiderivative soon.

Which is shorthand for “the sum of all terms from i=1 to i=7 of the form i^2 for integer i”. It is going to be useful to remember that some sums can be simplified a lot. For instance, the following identities are useful:

It’s also important to remember what happens when we multiply through a sum by a constant, add two sums together and take the difference of two sums. These are all in Stewart page 309. Proofs of these are also here.

This is in Stewart chapter 4.1. Remember that if we want to calculate the area under a curve (and within an interval), the first thing that we can do is to try and find an approximate value for it. To do this, we approximate the curve by a series of rectangles, which roughly match the shape of the curve. There are a number of different ways of doing this, but one thing which we will do for now is to keep the widths of the rectangles all the same (we will almost always do this, though you don’t actually have to).

We’ll start with an arbitrary function

and move on to concrete examples later. Let’s try and work out the area under the curve

. Let’s look at the area that we’re trying to calculate. It’s the area shaded under the curve here: 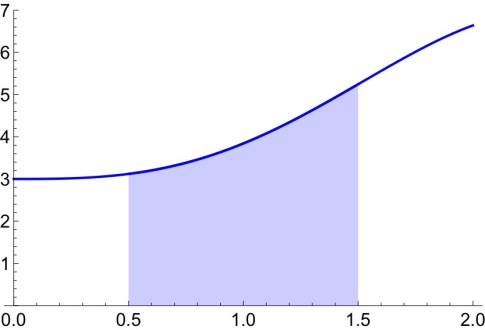 ) or we can try and approximate it by the right-most value (ie. the value of the function at

Well, the area in the left plot is:

and the area on the right is:

The subscripts L and R correspond to taking the left most point of the rectangle to be the value of the function at that position, and the right most, respectively. You will often see these written as

and $R_n$ where the n is the number of rectangles used in the approximation.

It looks like our approximating rectangles aren’t very good approximations of the true area, but at least we’ve got what seems to be a lower bound and an upper bound.

Can we do any better?

Well, how about we try and approximate it with two rectangles? We will split the interval into two and put in two rectangles. The plot on the left takes the left-most point in each rectangle to be the value of the function, whereas in the right plot, it is the right-most point.

What are the areas of these rectangles? Well the left plot is:

and the plot on the right has area

In fact we can simplify this a bit, because the widths of each rectangle is the same: They are the total length of the interval (1.5-0.5) divided by 2. Let’s remember that we first called the left and right points a and b, so we can write the widths of the rectangles as

Again, it looks like with two rectangles, we haven’t done a great job at approximating the area, so let’s try and use a few more rectangles.

The left plot is made up of five rectangles, each with width

. The area of the rectangles is:

Let’s give the positions of the left most points of each rectangle a name. The first one is going to be called

and is actually the point

. The second is called

. This is shown in the plot below: 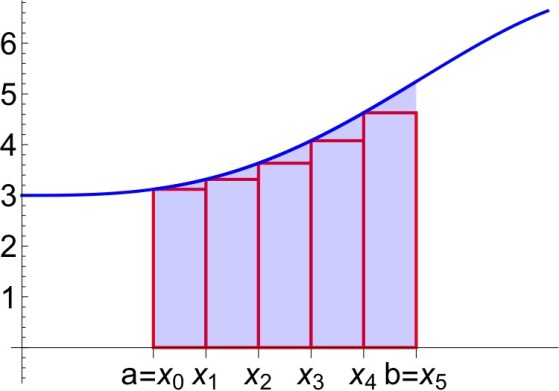 So we can write the above as:

We can write this in a simpler way using the Sigma notation:

Note that this is exactly the same as writing:

OK, we could have done exactly the same thing with the right plot, and we would have gotten:

Can we do any better? Well, let’s try with 15 rectangles instead of 5.

We can immediately write the area as:

for the left plot and

for the right plot. OK, so it seems that the area of the rectangles should be getting closer and closer to the true area under the curve, and in fact the left and right plots have rectangles which are looking more and more like each other. The left plot is underestimating by only a bit, and the right plot is overestimating by only a bit. Maybe, if we take a lot of rectangles, we will get a better and better approximation. In fact, let’s even take the limit that there are an infinite number!

in terms of a and b and the number of rectangles (which we will call n), so that we keep track of what we are taking to infinity. In fact

The following actually occurs in Stewart 4.2, and is covered in a lot more detail in this post. Skip to that post if you want to see things done a bit more gradually.

So, the true area under the curve in the first plot seems to be:

So now we are adding up an infinite number of rectangles but the area of each rectangle is going to zero. So long as we do things in the right way, the answer should be finite. Aren’t limits wonderful! Well, so long as they converge, we’re happy.

One thing that we can note is that it doesn’t actually matter whether we take the left plots or the right plots. In fact we could just make sure that the height of each rectangle is the value of the function somewhere in the interval of the width of the rectangle. We will call this

to mean “the value of the function somewhere in the

Let’s look at an example. What is the area under the curve

between x=0 and x=1? Well, according to the above it should be:

. Make sure that you understand this. So:

We can rewrite this as:

for now, so the sum that we have is:

So we have (just substituting back in for

Now we can use L’hospital’s rule. Take the derivative of the numerator and the denominator in the fraction and we get:

So this is it! That’s the area. The area under the curve of

, which, enticingly, can also be written as

OK, that’s enough for now, but we will see that in fact in general we won’t need to perform all these complicated sums when we want to calculate areas under curves – we will be able to use antiderivatives, but we will see why soon enough.