I realise now, in all the excitement of the FTC that I hadn’t written a post about the definite integral…that’s shocking! ok, here we go…the plan for this post:

That’s quite a lot, but we are more or less going to follow along with Stewart. Stewart just has a slightly different style to mine, so I recommend reading his for more detail, and mine for potentially a bit more intuition.

We have seen in previous lectures/sections/semesters/lives that we can approximate the area under a curve by splitting it up into rectangular regions. Here are examples of splitting up one function into rectangles (and, in the last way trapezoids, but you don’t have to worry about this). 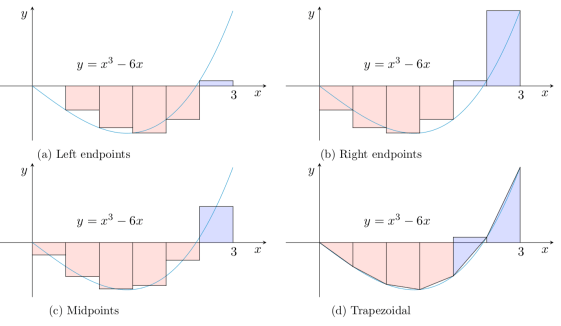 It’s clear here that the rectangles give a pretty crude approximation to the area, but if we were to take more, and thinner rectangles, the approximation would get better and better. So, what we are going to do is to take the limit as the number of rectangles goes to infinity, and their thickness tends to zero.

One thing to remember here: When we say area under the curve, we really mean the net area between the curve and the x-axis. Any area between the curve and the x-axis which is above the axis counts positively, and any area which is below the axis counts negatively, so in the pictures above when we are calculating the net area, the areas in pink count negatively, and the areas in blue count positively.

The Riemann sum was

We are just going to take the leap and say that:

You can sort of think of

as being what happens to

when you take the rectangles really small.

One important point (of many!): In the definite integral here we have written

here is what we call a dummy variable. I can change

to whatever I want and the answer is still the same. If I wrote:

This is EXACTLY the same thing. I could even write:

and it would give EXACTLY the same answer for the area. It just says, take my function, split it up into bits which we label as being at points

and add them together with appropriate widths.

are numbers, the definite integral is just a number. It’s the area under the curve (ok, under or over depending on whether the function is positive or negative at any one point).

However, we can (and you will see in the fundamental theorem of calculus) that we can treat the upper and/or lower limits of the integral as variables. Usually the upper or lower limit will be denoted as

Now time for a theorem which says what kind of functions we can calculate the definite integral with:

. In other words, the function is integrable on

Moreover, if it is integrable on

So, for instance the function

is continuous on, let’s say,

. If we want to calculate the area under the curve (we often say this instead of net area), we have:

Now we have that

. Remember, we have split the region up into

segments and here we have used the right point rule, which will generally be most convenient when we are writing out our Riemann sums. So:

Which we can manipulate to give:

Which, I’m sure you can all agree, was a tedious calculation to do! Soon, we will see that there is a much much easier way of going this! However, to stretch your brains and give you intuitions about Riemann sums we will pester you with a few of these just to make sure that you understand.

OK, so having defined the definite integral and looked at one example (one we happen to be able to do, because most examples would be very very hard using these methods), we can look at a few properties.

Note, that we talked about the interval

over which we were integrating, and assumed, understandably that

. However, the Riemann sum is perfectly well defined when this is not the case. Then we define

. With this change, we can see that shifting the limits of the integration gives us a sign change in

So you are always free to change around the integration limits so long as you throw in a minus sign whenever you do so.

then we just have…no area, so clearly:

Each of these can be proved by writing the integral as a Riemann sum.

In addition to this we have some properties related to inequalities of integrals:

In particular, this last property will be used when we prove the fundamental theorem of calculus part 1.

OK, quite enough for now. We’ve seen the definite integral defined in terms of the limit of a Riemann sum. The fundamental theorem of calculus part 2 will link this with the antiderivative, and after that we need never (or at least rarely) do any tricky Riemann sum calculations again.