Note: In the following I use the words power, and order somewhat interchangeably, in relation to the exponent of x.

Please also forgive the rather bad formatting for some of the expressions in this text. WordPress and LaTeX are somewhat unforgiving.

One of the topics which seems to have caused the most problems in the assignments for MAM1000W so far this year is that of polynomial division. Thus I want to go through an example here to show you exactly what we’re doing when we think about performing such a calculation.

If you think you already know what to do, but want to have some more practice, plug in some random polynomials into this page and make sure that you get the same steps as them.

In fact, the first question might be: what’s the point? Often the expression looks more complicated in the end than it does at the beginning. Well, part ofthe answer is that sometimes there’s nothing to do at all, but sometime’s there is. It’s important to ask what we are trying to achieve. A polynomial division question can be thought of very much like a normal fraction. If I give you the fraction:

You can think about ‘simplifying’ this to be

In what way is this simpler? Well, when you see the fraction, it’s hard to get an idea of how big it is when it’s written in the original form. What we’ve done in writing it out the second way is to say that

is a little more than 3 and a little less than 4.

If you were given the fraction

and asked to perform a similar calculation as above, the answer would be simply

is already in proper rational form and you don’t have to do anything, but:

What we are trying to do is, given an expression of the form:

where a(x) and b(x) are polynomials in x, write it in the form:

So, let’s see what we can do with the above calculation.

We want to calculate:

We are going to essentially do long division by polynomials in a very long-hand way, but I want to do this to show you that every step of the process is really perfectly acceptable to your mathematics.  When we do it in the normal way of long division we will be taking short-cuts, but those short-cuts are simply short-hand for the long way of doing it that we show here.

We start by seeing what the  term with the highest power of x is in the denominator. We see that it’s the

term. Let’s see which terms in the numerator are of higher power than

. Now we are looking at a much simpler question: What’s

You can see that this might be thought of as a first approximation of the above calculation.

What is that something? Well, let’s multiply everything in the above expression by the denominator:

Now we see that there is a

on both sides, so we can simplify the above equation. Let’s manipulate it to give:

So, what we seem to have found so far is:

We’re still not in proper rational form on the right hand side because the order is higher in the numerator than in the denominator. Let’s look at this term and repeat exactly what we’ve just done for this term:

We see that the highest power in the numerator is the

term, again (it had to be as the denominator hasn’t changed from our original denominator. Let’s see which terms in the numerator we can divide by

to give polynomials. Well, we can clearly divide the

, but we can also happily divide the

where again we need to figure out what

is by multiplying through by the denominator again:

Now we multiply out the brackets, which gives:

Again, the important thing to note here is that the highest powers of x cancel on both sides. We can now simplify this to give:

Now we see that the numerator and denominator are of the same power, so we are really almost there. We just need to do this last fraction. Let’s remind ourselves though what we’ve got so far. We found that:

but we just showed that:

so, putting everything together, we have:

Now let’s look at this last expression. Again, the highest power in the denominator is the

term. We see what we can divide by this in the numerator (to give a non-negative power of x), and it’s only the

Again, multiply everything by the denominator:

Again, see that the highest powers cancel. This is by design. Finally we then get:

I know that this looks like a lot of work, but that’s because we’ve taken the long route. Make sure that you agree with every expression in here. Now let’s do the short route. Note that at one step we will make a slightly different choice.

Step 0: This is the expression we want to calculate (I’ve put 0’s in as placeholders):

Step 2: Now we multiply the term at the top by the denominator, just as you would for regular long division:

Step 3: And now subtract this from the original numerator: 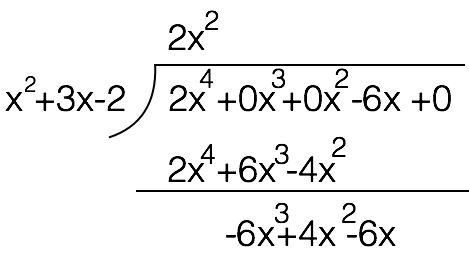 Step 4: Now we use this new term as the expression that we are dividing the denominator by. Now let’s just divide the

and we get a contribution 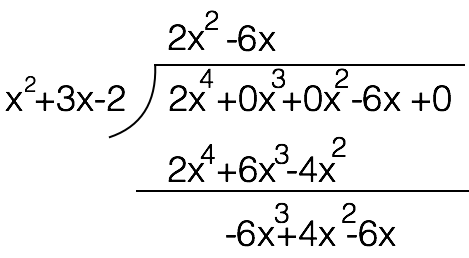 Step 5: Now multiply this new contribution by the denominator to get: 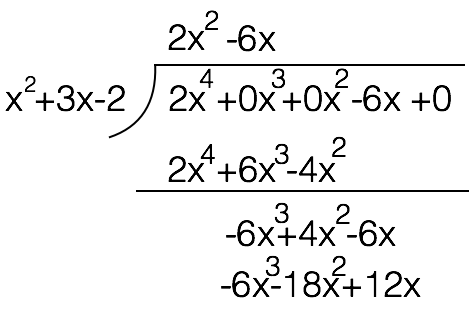 Step 6: Now subtract again, to get: 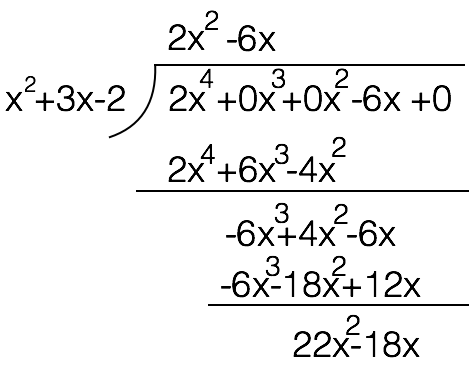 term in the denominator to give a contribution of

, so write this again at the top: 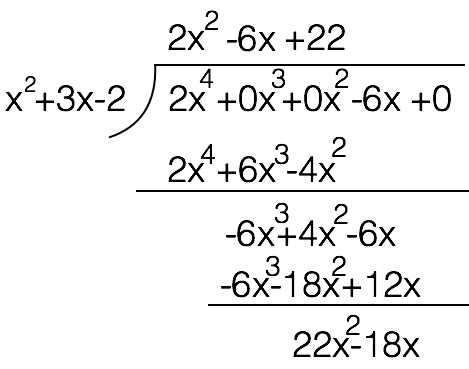 by the denominator to give: 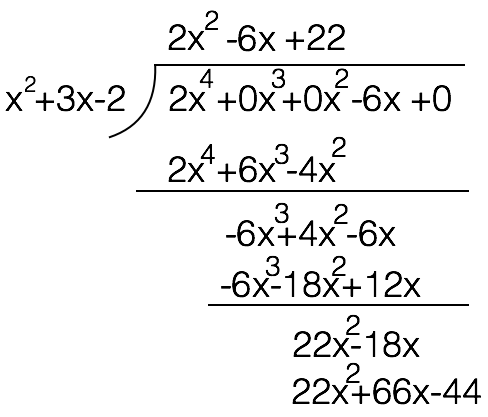 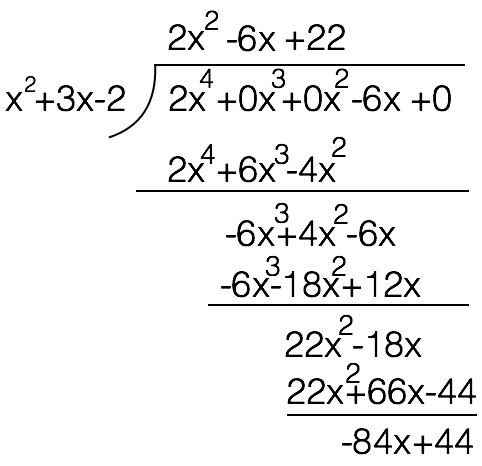 Now this last line has a maximum power which is less than that of the denominator, therefore this is our remainder.

Note that there were a couple of places in this calculation where we had a choice. In particular, in step 4 we could also have divided the

but we chose here the highest power of

. Prove to yourself that this would have given the same result.

So, the answer to the question: