Information, knowledge, science and technology give real power and is more essential for wealth creation of nations than capital or land.

Technology is a gift of God. After the gift of Life, it is perhaps the greatest of God’s gifts. It is the mother of civilization, of Arts and of Sciences. Technology continues to grow to liberate mankind from the constraints of the past. The most revolutionary aspect of technology is its mobility.
Anybody can learn it. It jumps easily over barriers of race and language. And its mobility is still increasing.

The world is in perpetual change: Science, technology and media are converging.

The widening gap in the economy between the developed and developing countries is essentially a manifestation of science and technology. Within Africa this is clear.

By 2050 Africa will need to create 18 million new jobs per year to keep up with the increased population within the labour market.

Less than 25% of African students go into STEM at tertiary level.

How can STEM resources be brought in for schools?

A study of the socio-economical impact of mathematics in France

PISA and TIMSS achievements in mathematics are poor up to now – essentially comes from poor teacher training. Lack of relevant strategies to implement an efficient mathematics teacher continuous professional development program is at the root of this problem.

See here for a detailed paper. 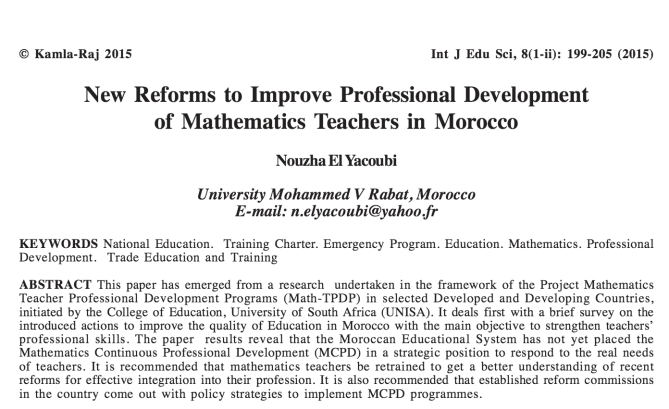