1) First find the augmented coefficient matrix of the system of equations.
2) Then use the three elementary row operations:

When we do this, we usually

4) Read off the solution

We now do some examples.

We can see from this that we are talking about a 3 dimensional space, and we have 3 equations (corresponding to 3 two dimensional planes). Generically these will intersect at a point. However, in some special cases, this will not be so. The simplest example to think of is if they are parallel. If they are parallel and separated, then there won’t be anywhere that all the three planes intersect. If they are actually the same planes, then there will be an infinite number of solutions (ie. intersection points). Actually there is another option, which is that while the normal vectors of at least two planes aren’t the same (ie. parallel planes), the three normal vectors may be coplanar – ie. all live in a two dimensional plane themselves. In this case we can have a situation that the three planes intersect at a line (or indeed that again, there is no common intersection). This will happen if the three equations are not linearly independent. In this case that means that if three equations are linearly independent, we can’t form one of them by a linear combination of the other two. If we can, then there will not be a single solution. Here’s an example of three planes intersecting at a line, even though they are not parallel planes. 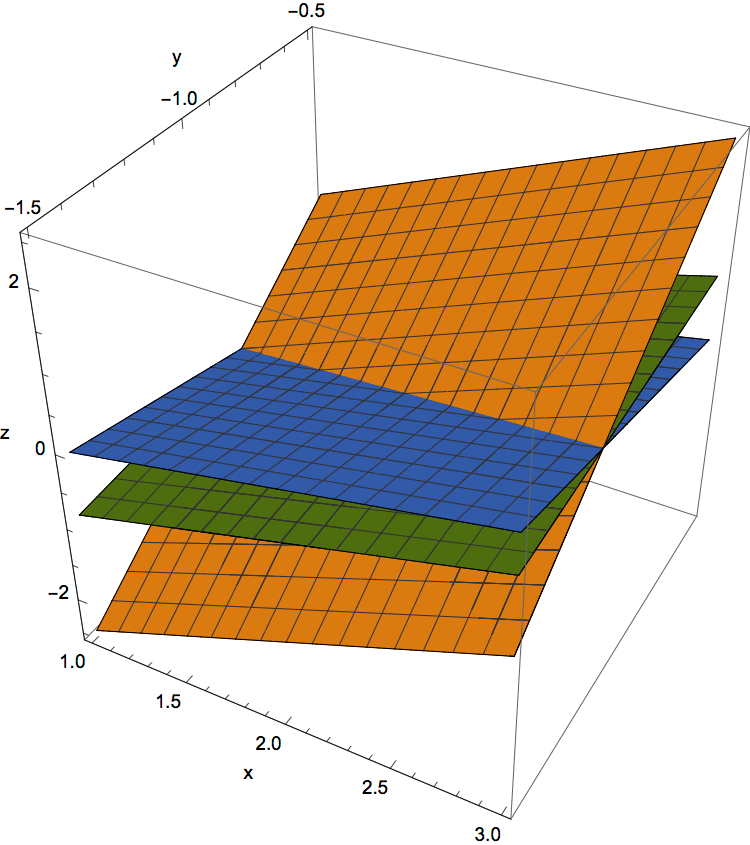 And here’s an example where none of the planes are parallel but there are no solutions: 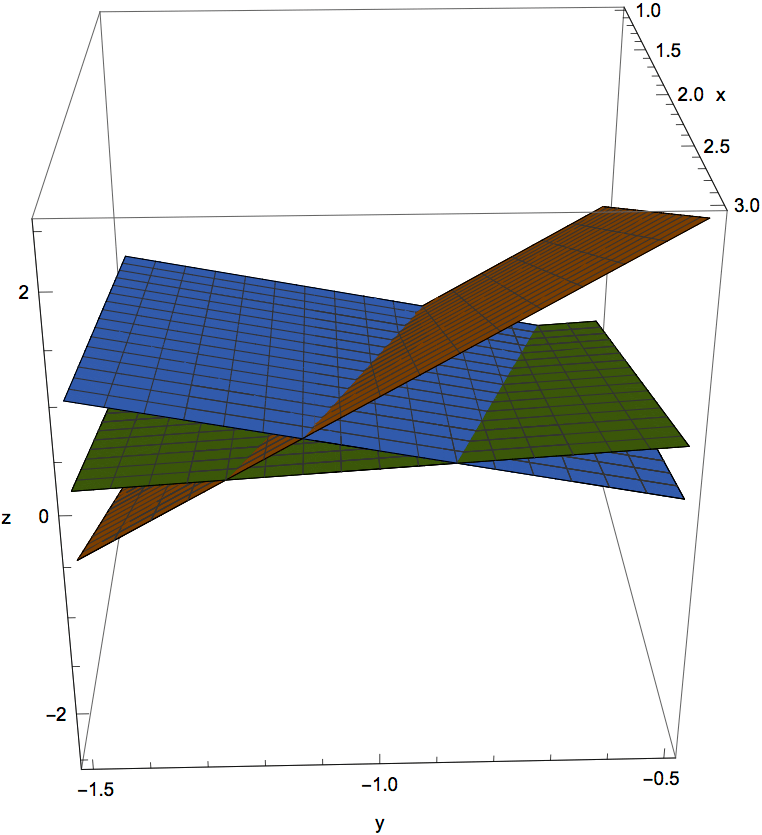 Note that the figures above is not from this example, but are simply showing that three planes in three dimensions don’t always give what you might expect. The above equations actually correspond to these three intersecting planes: This matrix now corresponds to this set of planes, two of which are different, but they still intersect in the same place… We’re finished with column 1, so we turn our attention to column 2. The first entry in column 2 that is a pivot is -5. However, if we bear in mind what we want the matrix to eventually look like, it will make things easier if we first use an elementary row operation of the first kind to swap rows 2 and 3. We can then use the 4 in column 2 as a pivot for row 2 instead:

Multiplying, or dividing a row by a non-zero constant doesn’t change the planes.

Now the number 1 is the first pivot in column 2. We clear the rest of column 2: We are now finished with column 2. The number 6 is the (first and only) pivot in column 3, and we proceed as before. This matrix is in reduced row echelon form. The solution is

so indeed we have a single point in three dimensions which corresponds to the intersection point of the three planes.

In fact in this example we will find that because not all of the equations are linearly independent, we will be able to reduce this system to three equations. This will correspond to a two dimensional surface in five dimensions. To define this, we will use a parametric solution, but it will have two parameters which will move us about the surface…we will look at this in more detail when we come across it…

First, we find the augmented coefficient matrix of the above set of equations:

Now we clear the rest of column 1.

We are finished with column 1. Before we go any further, notice that rows 2 and 3 are equal! This means we can do the following:

Now we follow this up by moving the row of zeroes to the bottom. At the same time, to get ready for the next step, we divide row 2 by -1.

We now turn our attention to column 2. The pivot we need is the number 1 in row 2, column 2. We then clear the rest of column 2:

And now we clear everything else out of column 3.

This matrix is in reduced row echelon form. The solution is

But this is rather intersecting. We have constraints on

can take on any values. Let’s rewrite this in a slightly different way which makes that clear.

The fact that there are two free parameters

means that we have a two dimensional surface of solutions. In fact we can make the solution a little neater using vectors: 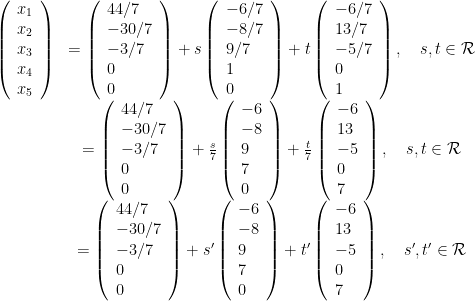 Example 3) In this example, we shall not explain what we are doing step by step. To indicate the fact that each augmented coefficient matrix is equivalent to the next (i.e., the associated systems of linear equations have the same solution), we use the symbol

Let’s use Gauss Reduction to solve

As usual, we reduce the augmented coefficient matrix to reduced row echelon form. 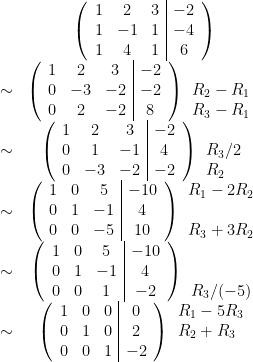 This is in reduced row echelon form. The solution is