This is an augmented coefficient matrix (in general, a rectangular array of numbers, like the above, is called a matrix; a matrix with an additional vertical line, which plays the same role as the equals signs in the original equations, is augmented). This matrix has two horizontal rows

, one row for each equation in the system. It also has three vertical columns

(one column for each of the two variables and one for the numbers on the right hand side of each linear equation). A matrix with two rows and three columns is called a

For example, the augmented coefficient matrix of the system

corresponds to the system of linear equations

we can rewrite the first equation as

and substitute this back into the second equation to get

, an equation from which

has been eliminated (and which is easy to solve). Here’s another way of achieving the same thing: Instead of substituting to eliminate a variable, let’s combine the equations in a way that produces a simpler set of equations with the same solution.

from the second equation. To do this, notice that if we multiply the whole of the first equation,

and then add it to the second equation,

which after simplification becomes the equation

which does not contain

to get a modified system of linear equations:

which becomes, after simplification, the equation

, in the modified system of linear equations with this new equation, which does not contain

, and we have the (further modified) system

which is also, of course, the solution of the system.

It’s interesting to see what all of this corresponds to in terms of the geometrical picture of what’s going on. Of course taking a single equation and multiplying it by a constant doesn’t change the line that it corresponds to (line, in this case as we’re in 2d). However, adding together equations does give us new lines. This might sound a bit strange. However, what we saw before was that the equations we get in the end, which are really like different combinations of the original graphs, correspond to two new lines (vertical and horizontal) which tell us the solution to the original equations.

1) Swap two equations.
2) Multiply an equation by a non-zero constant.
3) Replace an equation with the sum of that equation and a constant multiple of some other equation.

We can now translate these three operations on equations into an equivalent set of operations on the corresponding matrices. These operations are called the Elementary Row Operations:

If any of the following is done to an augmented coefficient matrix, then the resulting matrix has the same solution as the original:

E1) Swap two rows.
E2) Multiply a row by a non-zero constant.
E3) Replace any row with itself plus a constant multiple of any other row.

For clarity, we should mention that when we talk about the `solution’ of a matrix, we mean the solution of the associated system of linear equations.

The augmented coefficient matrix of the system

We shall now use elementary row operations to reduce this system to a simpler system with the same solution. When we worked with equations, we produced a simpler system by eliminating variables. When working with an augmented coefficient matrix, this is equivalent to trying to reduce the matrix to one with lots of 0s. For convenience, we shall write

for the first and second rows of the augmented coefficient matrix, respectively.

1) Our first step in the previous example was to eliminate

from the second equation. Our first step here will be to reduce the augmented coefficient matrix to one that has a 0 in the first element of the second row (the position in the matrix corresponding to the first variable,

, in the second equation). To make sure that the reduced matrix has the same solution as the original, we have to use an elementary row operation, and so we replace

(an elementary row operation of the third kind). This gives us the matrix

It’ll make things easier if the first non-zero entry in row 2 is 1 (rather than 3), so let’s fix that using an elementary row operation of the second kind:

In the previous example, our next step was to eliminate the variable

from the first equation, i.e., replacing

with a row that has a 0 in the 2nd column. To do this with an elementary row operation, we replace

We’ve now got a very simple augmented coefficient matrix and we can just read off the solution:

Let’s try the same technique — using elementary row operations to reduce an augmented coefficient matrix to a simpler one with the same solution — with a slightly bigger system:

In this case this corresponds to a system of three planes in three dimensions which look like: 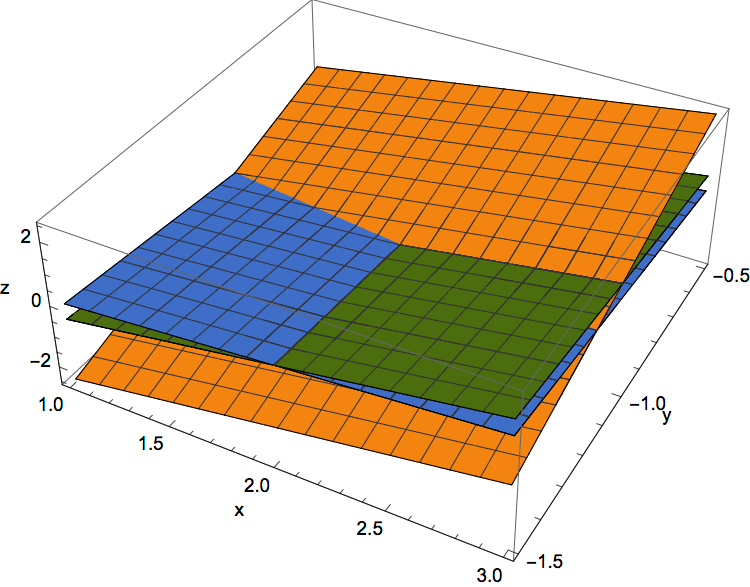 The augmented coefficient matrix is

We begin by `clearing’ the first column (i.e., eliminating the variable

from every equation except the first):

Now we make things neater by making the first nonzero entry in each row equal to 1:

The next step is to eliminate the variable

from the first and third equations by clearing the second column:

Usually, we would now multiply

so that the first nonzero entry (

This is what we wanted — a simple augmented coefficient matrix from which we can read off the solution:

Try and go through each of the matrices and work out what they correspond to in terms of both equations, and planes in 3d space. You will find that however much the equations change, they always correspond to three planes intersecting at the same point.

In the previous section, we used elementary row operations to reduce a system of linear equations to a simpler system in which it was easy to see the solution. This idea can be turned into a rigorous, systematic method — Gauss reduction — for finding the solution of a system of linear equations. But to start, we must decide what goal we have in mind when we use elementary row operations. We would like to produce a matrix that is simple enough that we can just read off the solution. With that in mind, we give some definitions.

The first non-zero entry in each row of a matrix is called a pivot.

In the matrix below

A matrix is said to be in reduced row echelon form if it satisfies all four of the following conditions:

Below is an example of a matrix that is in reduced row echelon form and several examples of matrices that are not.

This matrix is in reduced row echelon form.

Not in reduced row echelon form: there is a row of zeroes above a non-zero row.

Not in reduced row echelon form: some of the pivots are not equal to 1.

If an augmented coefficient matrix is in reduced row echelon form, then it is easy to read off the solution. We’ve already seen two examples of this: The last augmented coefficient matrix in the first example was in reduced row echelon form, and similarly for the second example. In each of these two examples, the system had a unique solution. In general, when we find the solution of a system of linear equations, there are three possibilities:

We shall prove this in a few of lectures.