The first thing to check is that this is true when

is a real number. It looks pretty strange at first site, especially the definition of

sticking out in the denominator like a sore thumb! How can this give us something real, as we know that it must? Let’s take

So that holds. How about trying to understand the behaviour of the trigonometric function of a purely imaginary complex number? Well, we know for sure that trig functions are always between -1 and 1, right? Well, it turns out that this is only true if

is purely real. In fact if it’s complex then the trig functions can give you any complex number you like. We’ll see that shortly. Let

is a real number, then:

Then we can see that

is purely imaginary and

is purely real. The other thing that we can note is that for large positive or negative

, both of these numbers are going to be large in magnitude. In fact these functions have names

which is known as hypergeometric cosine, and

which is hypergeometric sine. We can plot both of these functions in the figure below and see that they don’t behave at all like the normal sine and cosine functions that we are used to. 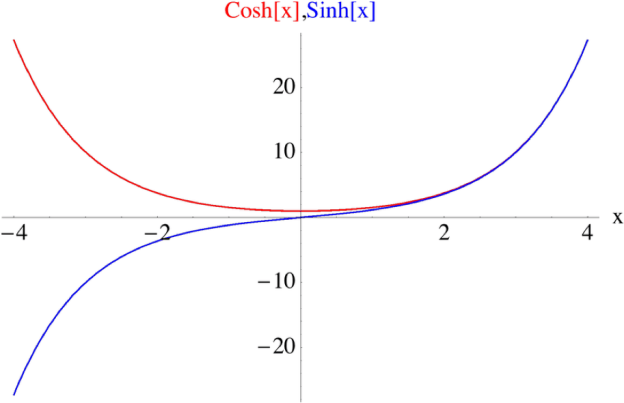 There are hyperbolic trig identities just as there are for normal trig functions, but unlike the case where

In fact it is precisely this hyperbolic identity which gives the functions their name. Unlike the sine and cosine functions which describe circular behaviour, so the hyperbolic versions describe the behaviour of things moving along hyperboloids. In the following you can see the differences between hyperolic functions and circular functions, which are very close, up to a single sign in their definitions, but have completely different behaviours OK, so let’s look at a very general example to see that actually we can have trig functions giving any result we want, not just numbers between -1 and 1 as we had when we were restricted to the real numbers. Let’s ask a very general question. Find

For any complex number

. We start by writing the trig function in exponential form and then multiply both sides of the equation by

Now we note that we can write

and we can happily now write the equation as a normal quadratic equation:

But we can solve this using the normal quadratic recipe (You can prove that this still holds, even for complex numbers, simply by using it and then plugging the result back into the quadratic equation). So:

So, we now have that:

How can we calculate what

must be? Let’s start by saying that

We can then solve this by taking the modulus and argument of both sides. First the modulus:

so now, given a

, we can calculate precisely the

. You can see that you would be able to do this for any

you are given, because any

). to be a solution to the equation, thus, the full solution is:

Remember that the argument of a complex number includes additions of

. This looks a bit abstract, but given specific values of

, we can calculate this relatively easily.

In the same vein as in the previous post, this is the mapping of lines in the complex plane under the Cosine function: