So last time we discovered that there was this amazing link between exponentials and trigonometric functions where the bridge between them was precisely complex numbers.

We can see also that now we have a third way to write a complex number. If you have a number in modulus argument form like:

Then we can also write this as

. This is an alternative way of writing the modulus argument form.

In this form it also becomes more obvious that moduli multiply and arguments add. If we have two complex numbers:

The fact that we can now take the exponential of any complex number is very powerful. The point is that in order to calculate this function, all we need to be able to do is to take exponentials and trig functions of real numbers, and that we can do.

This also allows us to invert the process of exponentiating. We know that given an equation of the form:

We can calculate the value of

. However, if I tell you that:

We’re a bit stuck because we don’t know how to take the natural logarithm of a complex number. In fact we do know how to solve for

but we have to be a bit more clever…

The first step in a question like this is to convert the right hand side into modulus argument form, but in its exponential version.

We know that the modulus of

, and the argument is

. Thus, we can write our equation as:

Now we know that we want to solve for

and we’d really like to get it in cartesian form, so we can say that we want to find

This can then be written as:

We can take the modulus of both sides of this and we get:

. Note that this is fine, because we do know how to take the natural logarithm of a real number, it was just complex numbers we had problems with. Now we can look at what we’ve got left after plugging this in:

. This is interesting. Up until now we thought that solving an equation of the form

would yield a single result. Now we see that this isn’t the case. Actually we have an infinite number of results. Here are a few in this infinite tower: 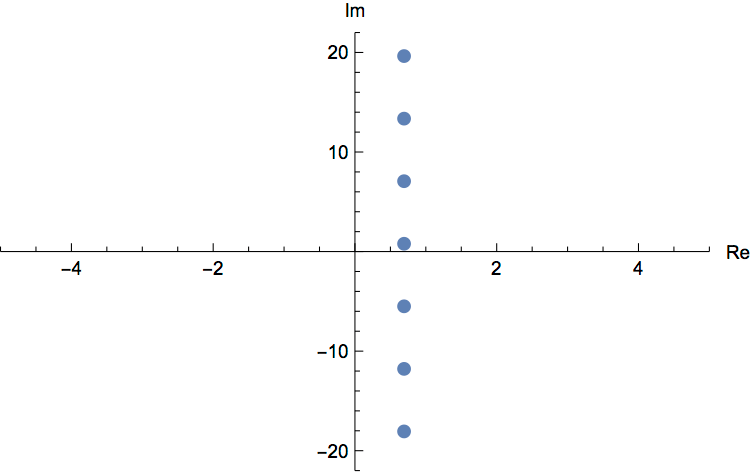 This method is a very general method for solving such problems as:

are given complex numbers. Convert the right hand side to exponential modulus argument form, then write

In fact we can even do this in general:

If you are given

An animation of the exponential function – this is extra and while it’s nice if you can understand what’s happening here, it’s not examinable.

I’ve created a little animation of one of the mappings from the previous post. I mentioned in that post that you can think about mappings from the complex plane to itself. In this animation I have taken horizontal and vertical lines and mapped where they go to under the exponential function. What happens in the middle isn’t too important, but it allows you to track what’s happening to each point in the complex plane as you exponentiate it.