Last time we looked at integrals which weren’t proper integrals because the limits of integration were infinite (either on one side, or both). This was one of the constraints we had on a well defined Riemann sum. The other constraint we had was that there were no infinite discontinuities in the integrand. Here we will show that sometimes we can indeed define an improper integral which does include such a discontinuity within the limits of integration.

Improper Integrals of the second kind: Infinite discontinuities in the integrand

We have seen what happens when we integrate

. Sometimes it gives a convergent value and we can find the integral, sometimes the improper integral does not converge and it gives us an answer of

. Indeed sometimes it doesn’t blow up, but it just doesn’t converge – as in the integral of

over an infinite range.

Now we are going to look at what happens if the function itself has an infinite discontinuity in it and we want to integrate over this region, or include it at one of the limits of integration. The formal definition of this can be found in Stewart page 418. Here we will look at the examples and examine what is happening.

is continuous on the interval 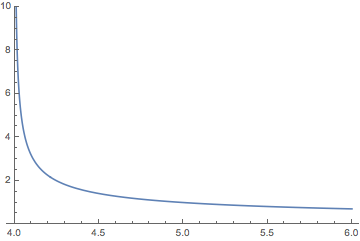 If we are trying to integrate this from

then clearly we will be including the infinite discontinuity at

.  We can define this integral however as a limit. Let’s see what happens when we do this:

but, just as in the cases of some of the infinite integrating regions that we saw last time, we can take this limit and it will give us a convergent quantity:

and so we can define the improper integral as:

goes to zero and

so we have to be careful about this. We can invoke L’Hospital’s rule again:

So the total answer is:

The limit does not converge.

For the time being, if we have an integral where any part of it is divergent, then it is said to be divergent as a whole. For instance:

can be split up as:

As the first term in this expression diverges, so the whole thing is said to be divergent.

Watch out for examples when neither of the limits have a problem, but the problem is somewhere in the range

Let’s look at an example:

If we have the integral:

We may not know how to do this integral. However, we can still say something about whether it converges or diverges. We use a trick for this and split the integral into two regions:

Certainly the first part is finite because it is continuous and the limits are finite. The question is whether the second part is finite. The reason that we split the integral up like this is because there is a simple function which is always greater than

(but not between 0 and 1 which is why we made the split).

Here, the graphs of 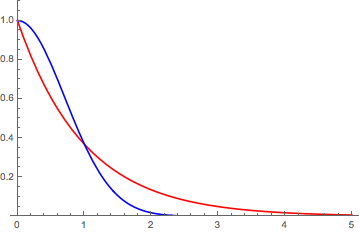 We can show that:

converges, and indeed we can show with the methods that we’ve learnt above, that it does. Thus, we can use the comparison theorem and say that because

is always greater than or equal to

in the region between 1 and

Let’s look at some more examples:

Let’s look at the integral:

This integral is actually not possible to write down in terms of elementary functions, but we can still say whether or not it converges. Because

is bounded between 0 and 1, we know that:

So if we can show that the integral over the larger function converges, then the smaller function must also converge. Indeed we know that

converges, and so the original integral also converges.

limit. On the bottom we have

goes to zero so we can see that in the large

Let’s use this as the comparison. Indeed between 3 and

However, in this case, as

the part in the denominator is dominated by

Let’s use this as the comparison. We know that, in the region of interest: