Today we are going to look at improper integrals. This will give us access to a whole host of integrals which, naively, looking at them in terms of Riemann sums don’t make obvious sense.

When we defined the definite integral we gave some constraints. We can now integrate (either approximately or exactly):

. An infinite discontinuity means that

is not bounded at some point in

(intuitively this means that the function goes to

at some value of

If we have an integral which does not abide by these constraints, we may still be able to calculate an answer for the area under the curve, but it will now be called an improper integral. The reason that these are defined as improper is because they will not themselves be well defined as Riemann sums, however, they will be limits of Riemann sums as we will soon see.

We can first ask about the integral over an open region, this will give us some intuition as to how to perform improper integrals. Can we perform some integral over the range

? Certainly this doesn’t make much sense if we are thinking about a Riemann sum. How much of the first rectangle do we include if we are supposed to be going down to, but not including

? The answer is that we can think about this as a limit of a well defined Riemann integral:

In this case the limit is equal to the regular Riemann integral over the closed region. Nothing very strange going on there, and it makes sense because we expect that just not including the point

shouldn’t change the area under the curve by a finite amount.

We can however use this technique when we want to ask about more tricky integrals: those where there is an open range and the open end of the range is at

or both. We know how to integrate:

This is just the area under the curve given below: 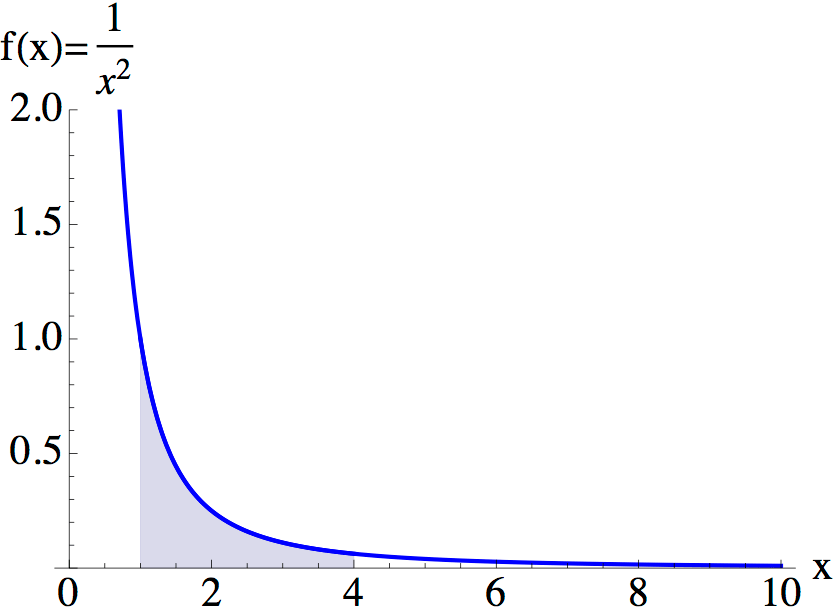 How about if we wanted to integrate further? Can we go up to 100 rather than 4? Sure, this will give an answer of

. But this is rather interesting. We have gone a lot further out, but the value of the integral has only change from 0.75 to 0.99. What about if we go even further out? We can see easily that as we go further and further out, the answer will get closer and closer to 1. In fact we can define an integral, called an improper integral, where we integrate all the way up to

is 0, and so the final answer is 1. It is the value that we were getting closer and closer to before we even knew what an improper integral was.

Let’s look at another example

that the area under the curve should be infinite, but this isn’t necessarily so as we saw in the last example. Let’s look at another. We can certainly perform the following integral for finite

What happens if we take

This example and the previous are said to be convergent. As

the value of the integral converges to some fixed value. Sometimes this will not be so:

For example, if we wanted to try something very very similar to the above examples:

This looks so similar to the first example, and we can see that as

the function itself goes to zero, but in this case it doesn’t go to zero quite fast enough, as we integrate more and more of the function, we continue to get contributions and they never go to zero:

continues to increase, and so this doesn’t give a finite answer. The result of this integral is

and thus it is said to be divergent.

in exactly the same way:

.
On the other hand:

Is not convergent. ie. it is divergent and the answer is

In fact we can find out for what value of

is convergent. The answer is that for

the integral is convergent, and

it is divergent. We saw that if

it is divergent because of the logarithm (in fact this is called a logarithmic divergence). It should be very clear that for

this is divergent, but you can check for

The definition, summarising the above, for an improper integral of type I can be found in Stewart page 414.

Sometimes we have to be a bit more clever about taking the limit as it won’t be all that obvious. This often happens when you are integrating a product of functions, one of which diverges as

and one of which goes to zero in this limit. For instance:

We can define this integral through the limit:

and then integrate by parts to get:

-1 doesn’t behave badly, and we know also that

goes to zero in this limit, but how about

? We can use l’Hospital’s rule to calculate this. This states:

This can be iterated as many times as necessary until you can see the answer. In this case we just need to take the derivative once:

Thus, the overall integral is convergent and

Both limits at infinity

. In this case we can simply make a split and use the above definitions:

is any finite number. If either of these terms in not convergent, then the whole integral is said to be divergent.

Let’s look at an example that, done in the wrong way (but one which seems logical) will give the wrong answer:

If we were to take this as a limit of

we would get that the answer is zero – it looks like the two sides of the odd function cancel each other out. But this is only because in this case we are taking the limits to

at the same rate. We can tend to these limits at different rates and find that the answer can be anything we want. Instead, the correct way to do this is to write:

Both of these contributions do not converge, and so the whole thing diverges.

NB. The definition of divergent is simply that something is not convergent: It doesn’t have to go to

to be divergent. For instance

oscillates, and so is not convergent, and so is said to be divergent.

In the next section we will look at improper integrals of the second kind.

For some good examples, look