Visual Differential Geometry and Forms – a mathematical drama in five acts, by Tristan Needham – a review 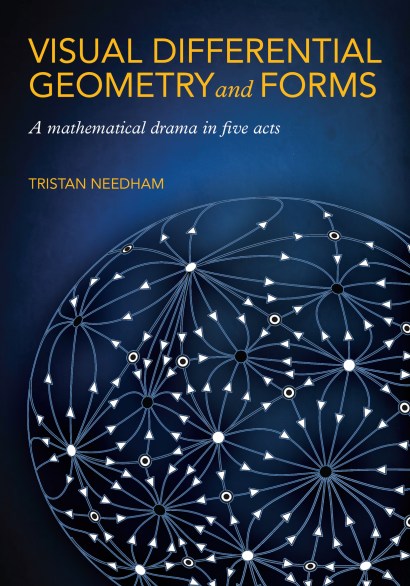 Studying physics, some two decades ago at The University of Bristol, I found the majority of what we covered relatively intuitive. Even the arcane world of quantum mechanics, while impossible to truly visualise, is, paradoxically, often relatively simple to calculate, and the objects that you use are directly from the world of complex numbers, differential equations and linear algebra. What stumped me however were tensors. I found it so hard to really picture what was going on with these objects. Vectors were ok, and the metric tensor I could handle, but as soon as you got onto differential forms, all my intuition went out the window. The world of differential geometry, while I could plug and chug, felt like putting together sentences in a foreign language where all I had were rules for using the syntax and grammar, without a deep understanding of what the objects were

This book would have answered all of my prayers back then. From the author of Visual Complex Analysis (also a truly beautiful book) comes this deep dive into the world of differential geometry, from the perspective that it can be understood intuitively using the appropriate visual illustrations, and explanations. I love books like this which really have a deeply thoughtful pedagogical style where the author isn’t just laying out the facts, but taking the reader on a journey of discovery, and Needham does this masterfully. It’s the kind of book that you want by your bedside and while it’s definitely not light reading, it takes you into a world of adventure in new ideas which I think would suit any well-motivated undergraduate in physics or maths (though more the former).

The book takes you on a journey which links geometry to topology through the Global Gauss-Bonnet theorem in several different ways, and then goes on to teach General Relativity in the language of forms, which I believe takes Gravitation by Misner, Thorne and Wheeler, and condenses a great deal of its essence into something smaller than the 1000+ page monster which filled many weeks of my undergraduate degree with equal parts pleasure and perplexity.

Differential Forms are only dealt with in the last act of the book, and again, the visual queues guide you through what can otherwise simply feel like a tangle of non-commutativity. This of course allows one to write Maxwell’s equations in their simplest and most beautiful forms (no pun intended). It may seem that 300+ pages of preface are a lot to get to this point, but a great breadth of ground has been covered in beautiful detail before you get into the area of forms.

Having read the first 100 pages thoroughly, I have been enjoying dipping in and out of sections of the book which give great insights into undergraduate areas of physics, and I really wish that I had been able to have a book like this when I was studying back then. Such a book will set you up well for getting into graduate level theoretical physics, without a doubt.

Overall, as can probably be seen clearly, this is a valuable and beautifully created guide to what can at first seem a confusing area of mathematical physics. There are other contenders that try to teach this subject, but this is the best that I have come across so far and I will continue to enjoy learning from it (and almost certainly teaching from it) over the coming years, I am sure.