I’ve been getting a lot of questions about absolute values, and so I thought I would try and clarify things here as much as possible. I’ll give some basic definitions and intuition, and then go through some examples, from easier to harder.

The absolute value function is just….a function. You give it a number, and it returns a number. In the same way that

is a function. You give it a number and it returns that number multiplied by itself. So the absolute value function, which we write as

takes a number and returns the same number if the number was positive, and the negative of the number if it was negative, thus returning always a positive number.

Note that the definition above comes in two parts:

We can write this formally as a piecewise defined function as (piecewise because it is defined in pieces):

The function is defined differently therefore for

. So, when we are dealing with this function, we should deal with the two regions separately. You might ask why the first one is greater than or equal to and the second one is only less than. The answer is that we could write it as greater than for the first, and less than or equal to for the second, but it would be exactly the same thing, because for the point 0, -x is the same as x. If we plot a graph of the function, it looks like this: 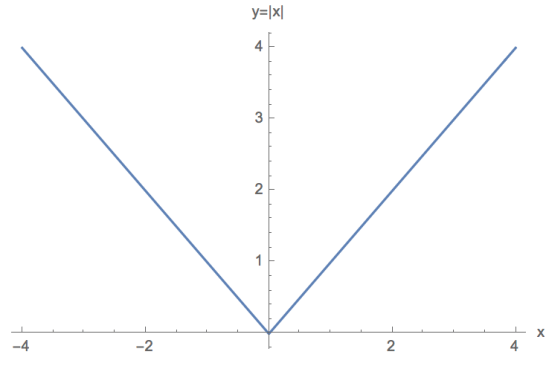 Now, how about not just looking at the absolute value of

but of something a little more complicated. How would we define

? Well, in the above definition it does not say what x is, so we can simply plug in anything for

But the part after the ‘if’ can be simplified a little, just by solving each one for

less than zero, and for greater than or equal to zero, it’s now either side of

. Again, which part we put the equality doesn’t matter, so long as it is somewhere defined for

. We can plot this and we find that it looks like 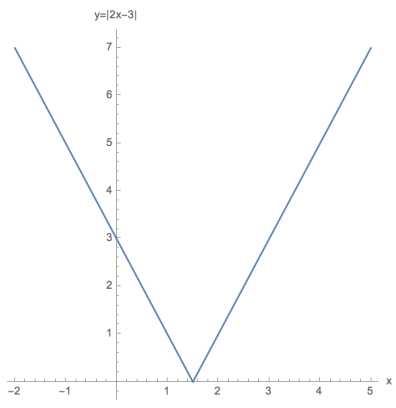 ) and is defined separately for either side of

If we want to solve an equation with an absolute value, we do so by considering each piece separately. So, if you wanted to solve

The solution is thus the union of these two solutions ie

How about an absolute value inequality? What if we wanted to solve

? Again, we do this using the piecewise defined function. We treat each piece separately. We know that this absolute value has its pieces defined separately for

, so let’s calculate the inequalities in each region separately:

by the above definition of the absolute value, in this region

, so the inequality in this region is

Multiplying both sides by -1 changes the direction of the inequality to give:

which can be solved to give:

But we know that this is only valid in the region

(for this piece). So we have to take the intersection of the solution, with the region that it’s valid in.

In interval notation this gives:

by the above definition of the absolute value, in this region

, so the inequality in this region is

which can be solved to give:

But we know that this is only valid in the region

(for this piece). So we have to take the intersection of the solution, with the region that it’s valid in.

In interval notation this gives:

OK, now we have the solutions in the two regions, and we can take the union of the two (ie. either of them are valid solutions to the original inequality, and the answer is:

Looking at the above graph for the function

and asking for what values of x is the y value greater than 4, the answer above seems to make sense. It’s true for any

or for any value

OK, so this is how to calculate a very simple absolute value inequality, but now let’s look at something a little more complicated.

Find all x such that

Now we have two absolute values to have to think about. I am going to give one method to think about this sort of problem, which is very general, but there are other methods. I recommend this as a failsafe one which will work in just about any context, with any number of absolute value functions.

The first thing we will do is to take everything over to one side of the inequality to give:

Let’s forget about the inequality for now and just focus on the left hand side. We can think of a function

and eventually we will want to ask when this is less than zero. For now, let’s see if we can understand the function itself.

In the previous example we used the definition of the absolute value to write out a piecewise defined function. We can do the same thing in this case, except we have to be careful because

is defined in two pieces, for

is defined in two pieces for

. So the whole thing can be written in three pieces. One for

(in which case the terms inside both absolute value signs are negative). One for

(in which case the term inside the first absolute value sign is positive, and in the second is negative). And one for

(in which case the terms inside both absolute values signs are positive). So overall we can summarise all of the above by:

which can be simplified to:

OK, so now we have three regions that we have to solve our original inequality in:

Now let’s solve each of these separately:

Now we have three intervals and we can take the union of them to get the final answer:

Are there other ways of doing this? Yes! Absolutely! And it’s a good idea to try and play around with other ways too, but I think that this is a good general method for dealing with inequalities (and equations) involving absolute values. The steps are:

This procedure can be done for absolute value inequalities with any complicated combination of functions.

Let’s try one more example this time with a quadratic function inside an absolute value with an inequality.

Now we have a quadratic function inside the absolute value sign. Let’s write everything on one side of the inequality and define a function

. So the problem we want to solve is

Now, we can write this function as a piecewise defined function:

Looking at the first one we have

. This is a parabola and we want to know when it is less than zero. In fact we can do this by solving it for zero. This has zeros at

or $latex $x=-1$. Because it is a U-shaped parabola, we know that it will take values less than zero in the region between these two points, so

is true for the interval

. The other region is where

values in the interval

. So we can actually write our piecewise defined function as:

which can be simplified to:

ok, good, now we have our three regions (it looks like two above, but really we can think of them as less than or equal to -1, from -1 to 3, greater than or equal to 3. Let’s look at the first inequality first.

This is now a downward parabola. Finding the zeroes of

. Because it is a downward parabola, the values of x for which the inequality holds (ie. the function is less than zero) is going to be

. (plot the function to make sure that you understand this).

) are also in the solution to the inequality (

). ie we have to take the intersection of the two:

If you are confused by a statement like this, write out a number line.

We see that the overlap between the regions is:

ok, so we have the solution to the first region! Now let’s look at the second.

Now we have to take the intersection of the solution with the region that it’s valid in, which corresponds to:

Drawing the number line as before, we find that this is given by:

Great! Now all we have to do is to take the union of the two solutions we’ve found:

with such an expression it’s best to order it so that the lower intervals come first followed by the higher intervals which in this case gives:

and that’s it. That is the solution to the question: Find all

. Again, there are most likely shorter ways of doing this, but we are able to use the same method in many different contexts and it should work every time.