Can we find the inverse of a function which is not one-to-one? (part one)

Asking what the inverse of a function is, is the same as asking what is the function that will undo this function?

What is the inverse of the function

? That is asking the question, if I put a number into this function (call that number a), it will give me another number (call it b). What is the function which, whatever number I put in, when applied to the number that comes out from the first function will be the original number. That is to say:

. g(x) is the thing that undoes f(x). Put simply, composing the inverse of a function, with the function will, on the appropriate domain, return the identity (ie. not do anything to the number you put in).

In the case of the above function f(x)=x+3, the answer is simple. If I want to undo the action of ‘adding 3’, all I have to do is to subtract 3. So

Here, we don’t have to specify the domain because this will work everywhere. In particular, the range of the original function (all the numbers that it can spit out) and the domain of the second function (all the numbers that it can take in) are the same. So whatever number we put into the original function come out and can be taken by the second function (the inverse) and all is well.

What is the inverse of

? Well, as it stands, there isn’t a unique answer. We are trying to find a unique inverse for a function. Let’s say we put in the number 2. Of course we get out 4. If we put in 3, we get out 9. It’s pretty clear how to undo this process. We just take the square root. So you might be tempted to say that here the inverse of f(x) is:

. Indeed if you put 9 into this you get out 3, so you’re back to where you started, and we’re happy.

How about if we put in -3? Well, putting in -3 to the original function gives us 9. Plug it into what we thought was the inverse and we are left with 3, which isn’t what we started with, so

doesn’t seem to have been such a good guess. We could try again with

, you find a point on the x-axis, it will uniquely take you to a point on the y-axes by finding where it cuts the graph. However, given a point on the y-axis, there are two possible places on the graph that it can cut through. This function is not one-to-one. In fact it is two-to-one. Two different x-values will give the same y-value.

For this reason we can’t actually find a unique inverse for a many-to-one function. How can we get around this? Well, the way we will do it is to restrict the domain. The function

does not have a unique inverse, but the function

restricted to the domain

turns out to be just fine. This function is indeed one-to-one, because we’re saying that we’re no longer allowed to plug in negative numbers. So while the graph of the function on the left doesn’t have an inverse, the middle and right functions do.

ok, so it’s clear now that to define an inverse for

we have to be careful about the domain – in this case we can choose positive, or negative x, but not both (though of course you could choose a strange domain like

if you were feeling perverse. Make sure you can see why this would give an invertible function.

Let’s now look at a function which is not just two-to-one, but many-to-one. In fact we’re going to look at a function which is infinite-to-one. Let’s look at f(x)=sin(x). Can we invert it? Well, clearly if we reflect y=sin(x) in the line y=x, we get something which definitely doesn’t look like a function (the dashed blue line is y=sin(x), the solid blue line is the reflected y=sin(x) and the dashed black line is y=x). 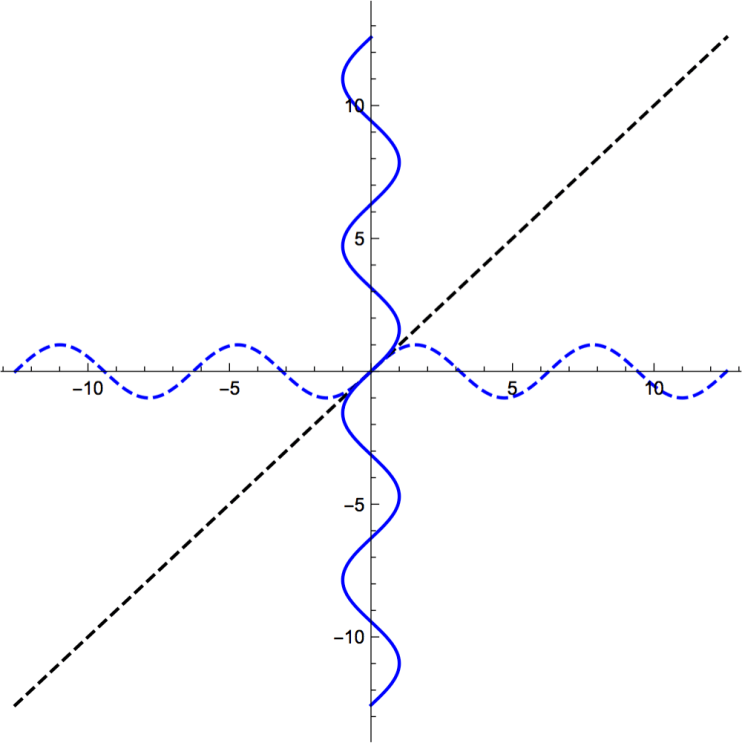 While this might be pretty, the blue solid line sure doesn’t give a function. How could we give a function which is the inverse of sin(x)? Well, again we can restrict the domain.

Because trigonometric functions describe angles, it would seem natural to consider the fundamental domain, which is the range

. If we go any further than this in either direction then the function starts to give us values that we’ve already obtained from within this range. Let’s plot the graph of sin(x), and its inverse (as well as the reflecting line y=x) within this range: 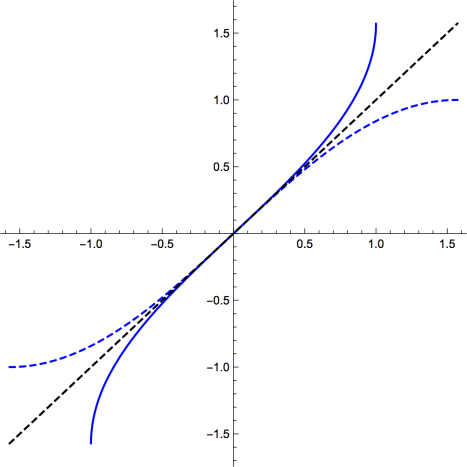 Ok, now it looks like we’re getting somewhere. The function looks to be one-to-one and passes the vertical line test, so we seem to have found an inverse function for sin(x) within the restricted domain.