The vector, or cross product

When we took two vectors previously and found a way to multiply them together using the dot product, we ended up with a scalar. However, there is also a way that we can take two vectors and multiply them together to give a vector, but a vector with very specific properties with respect to the first two. What we will define here will be in three dimensions, and, unlike the dot product, does not generalise easily to other dimensions, (other than 7) though it can in fact be extended.

of the angle in between them. The direction of the resulting vector will be perpendicular to the two original vectors:

is in the direction perpendicular to

. However, this is not uniquely defined. We can think of two vectors (pointing in opposite directions) which are both perpendicular to two other vectors and are unit magnitude. This is shown in the figure below. 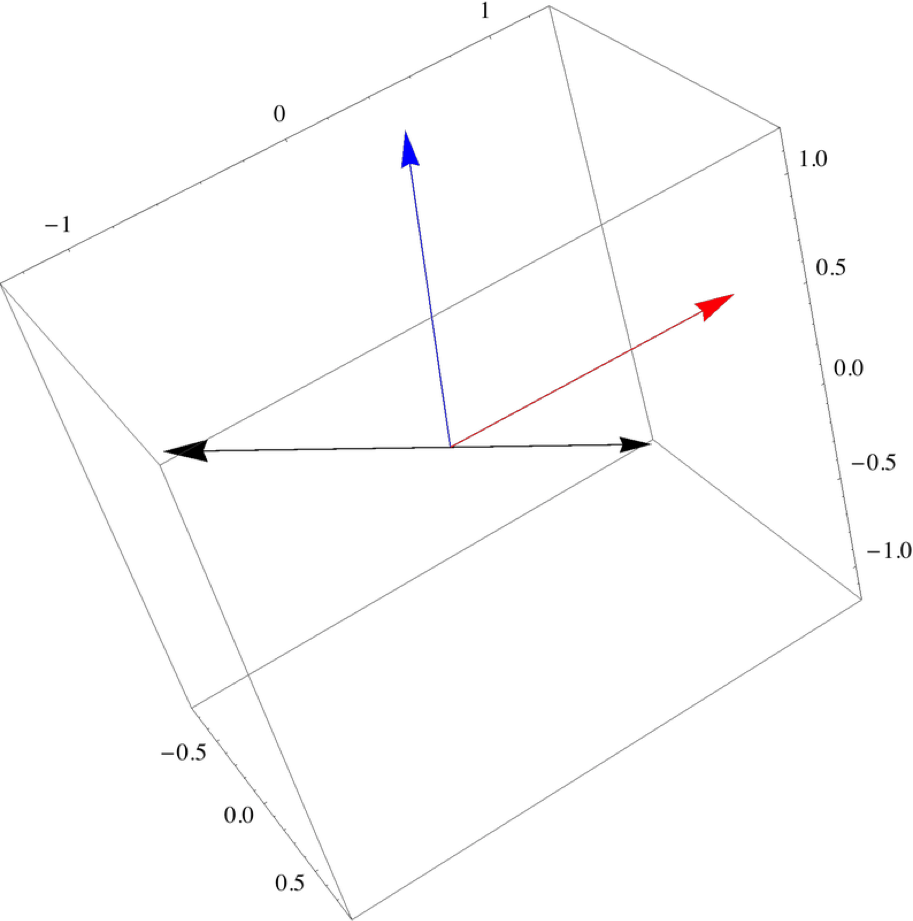 of the angle in between them. One of these is the cross product. The right hand rule tells us which one.

To disambiguate which of the two perpendicular vectors is the result of the cross product we use the right hand rule. Rather than trying to explain this in words, or in still pictures, I’ll simply point you to a video where this is explained clearly.

In order to understand how to take the cross product, it is informative to look at the cross product of the unit basis vectors. Clearly because their magnitudes are all one and the angle in between them are

, their cross products are going to have unit magnitude, the question is what direction will they be.

For instance, if we want to calculate

we know that there are two vectors perpendicular to this and of magnitude one. These are

. However, according to the right hand rule we get:

Once you have this, all of the other cross products are the cyclic permutations of this expression. That is, you simply shift each vector to the next position in the expression and take the one at the end and put it at the beginning. Shifting each one of these along one, gets you:

and shifting it along one more gets:

Shifting it along again takes us to the first expression. Swapping around the order of the terms in the cross product changes the result by a sign:

And the same for the other two above. If we take the cross product of a vector with itself then clearly the angle in between the two vectors is zero and so you are left with the zero vector:

and find the cross product of the two by expanding everything out:

Make sure that you can follow the above and fill in the expressions for “etc.”. This looks like a terrible mess but in fact we can come up with a new form of notation that will allow us to remember how to perform this calculation with relative simplicity. First we need to define a determinant of an array.