In all of this talk about differential equations, we haven’t spoken all that much about the uses of them, apart from a little about population dynamics, nor indeed about their amazing properties. Part of the reason for this is that in general (though of course not exclusively), the most interesting differential equations are a single step beyond what we have been looking at. They are differential equations in more than one variable. For instance, rather than just having a

be a function of

a function of both

. It turns out that this little change makes all the difference in the world. All of a sudden we can see how things change in both space and time. We can look at real dynamics of systems which are not local to a single place.

This is a topic for another time, and comes under the term partial differential equation. However, we can extend what we’ve done just a little and see something amazing occur. This will also tie in nicely with the section to come on 3d spaces.

Let’s think of a particle being placed at some point

where these label the coordinates in a 3 dimensional space. We could even consider that the particle moves through this space, and this could be described by

. If I give you these three functions

, then for any time

you can find precisely where it is.

is described by three differential equations. These equations are linked. The equations (which we’re simply going to pull out of a hat) are given by:

are constants which we can choose. These equations were first explored by Edward Lorenz and define what is called the Lorenz system.

you can tell me how fast it’s moving in the

directions. In fact it’s possible to solve this system of equations using computational techniques and given a starting point

we can watch the particle move around.

So far everything seems fine, however, the solutions to these equations lead to something remarkable.

Let’s say that we start with some particular initial condition

. We can run the simulation as long as we want and see the trajectory through 3d space of the particle. It turns out that it traces a rather beautiful pattern like this: 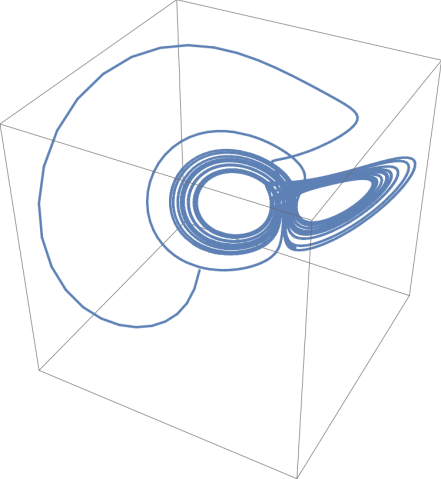 Now let’s change the starting conditions, just a tiny amount. You run the simulation with the two starting points and watch the two particles as they dance around together. You would expect that if you change the initial points just a little, then the trajectories should be pretty close together far into the future. However, you will find that some short time into the future, all of a sudden the trajectories diverge.

This behaviour is called chaos. In a chaotic system, you have to know to perfect accuracy what your situation is now, to know what is going to happen arbitrarily far into the future. Chaotic systems are all around us, from the weather, to the stock market, even to bouncing pool balls. In this animation you see precisely this chaotic behaviour with three initial conditions for the above equations.

If you want to know more of this then take a look at some of the courses on offer here (but only after your exams!).