A lot of the following is going to be rather intuitively clear, but we need to build up a framework where we are all speaking the same language to develop the powerful tools that we are going to find over the coming sections. We will be dealing here specifically with three dimensional space but we will discuss along the way the extension of these concepts to higher dimensional spaces. The higher dimensional stuff is not examinable but I think that sometimes it helps to understand the things which are special about three dimensions, and the things which are not.

In particular, I can recommend having a look at the web page of John Baez who discusses the regular polytopes in different numbers of dimensions here.

It’s clear that to define where you are in three dimensional space you need to set up a few key ingredients first. What you need is first of all an origin – a place to call home from which you will relatively describe your position. Everything will be defined in terms of distances and directions from the origin. The other thing that you need to specify are the axes of your space. Generally we will call them the

In three dimensions the three axes define for us three orthogonal planes. We can think of these as three 2-dimensional planes which are all at rightangles to each other. We denote these the

-plane. You might have thought that if you have three of these in three dimensions then in some other number

of dimensions you will have

planes, but this isn’t the case. To define a plane we need to pick two axes. In three dimensions this is choosing two directions from three, or

, which is three. In four dimensions you pick two directions from four. ie.

. If we label the axes in four dimensions as

for instance, then we have the

planes. In 11 dimensions there are

planes. We’re not going to enumerate them! In fact there is a simpler way of writing

which is that this is always going to be given by

. Actually 3 dimensional space is already special for this reason.

In two dimensions there are said to be four quadrants. where both the

values are positive, two when one is positive and one negative and one when they are both negative. In three dimensions there are eight of them. We can denote them by

. We call these octants. This means that in each sector we have to choose either positive or negative for each of the directions. This gives

and is a distance

plane and a distance

plane (Note that sometimes we will call it the

plane and sometimes the

plane. Learn to go seamlessly between these notations. 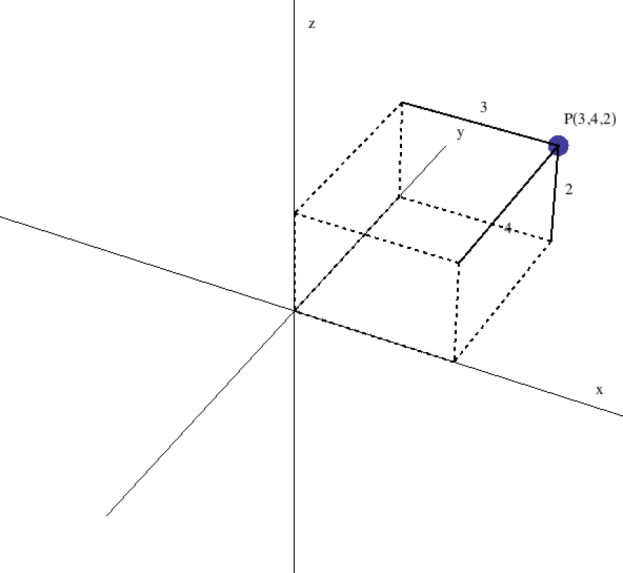 and its distances from the various coordinate planes.

coordinate plane, this is like shining a light from above and seeing where the shadow of the original point lies on the

plane. The answer is another point (call it

. Similarly we can project onto the other planes and we get

. These can similarly be projected onto the coordinate axes. If we take

and project it onto the

axis we get a point at

Projections can be very useful for looking at straight lines in 3 dimensions. If you are given the 3 points

-plane. The points project to:

. Now we can calculate the gradient between the first and the second point (call it

) and between the second and the third point (call it

. In two dimensions, a curve is a set of points in

. In 3D, an equation involving

is a surface in

. For instance, in 2D we could look at the set:

The first gives the set of points along the curve

. How about in three dimensions? The set of points described by:

Involves all points such that

is such a point, and

is such a point. In fact all points, independent of the

satisfy the requirements to be in this set. This means that the set of points is just the flat surface at

. This is shown in the figure below:

In fact anything of the form:

Try using Wolfram alpha to plot surfaces in 3 dimensions. For instance, if you want to plot

you have to solve the equation for z which gives you

and then you can write in Wolfram Alpha:

Convince yourself that all linear functions will give flat surfaces.

Let’s look at a slightly less trivial function. How about:

” rather than writing it in the language of the set of points, but they are equivalent. This says “I don’t care about what value

is but I want all those points whose

values square and add to one. ie. for each

values we have a circle of radius 1 centred at

. This surface is shown here:

We can see that because

is not constrained, this is just a cylinder. ie. a circle defined at all values of

. We could add another equation. For instance we could have:

which now is explicitly the

slice through the previous surface. It is simply a circle at

of radius 1 centred at

The definition of regions in three dimensions is also relatively intuitive. For instance: the region defined by

is the region in between the spheres of radius 1 and 2 centred on the origin. 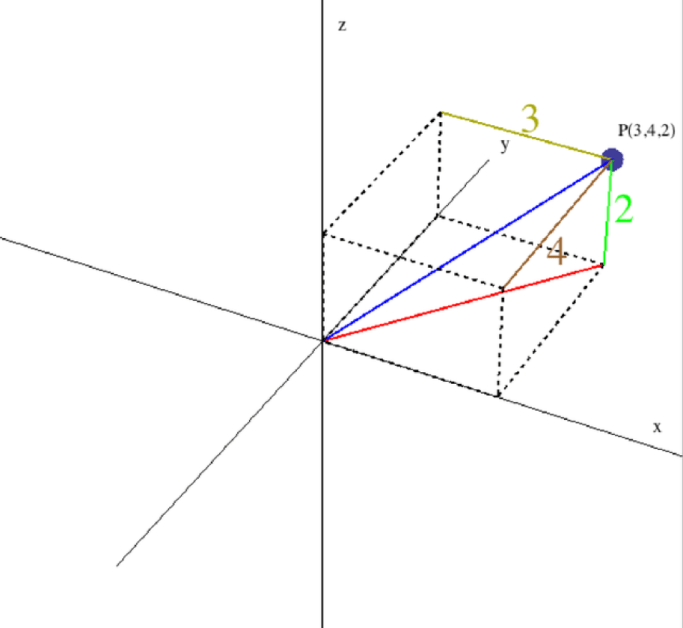 The distance from the origin to the point

is given by by using Pythagoras with the red, green and blue lines. ie.

We can ask about distances in three dimensions as a simple extension of two dimensions. We already know that the equation for a sphere in 3 dimensions of radius

centred about the point

. This is thus the set of points (ie. the surface in this case) all of whom are a distance

. This already tells us that to find the distance between two points at

all we need is

as you would expect. The following diagram may not be intuitive straight away so figure out carefully what the different colours in the diagram correspond to. You can see the equation for the distance in 3d coming directly from Pythagoras by looking at the distances of the projections of these points onto the coordinate axes.