It turns out that there is another way to represent a complex number, but rather than using the real and imaginary parts to specify it, we will use two other pieces of information.

If I tell you that a complex number is a distance

away from the origin in the complex plane, then this leaves you with a whole circle of possibilities. All the points on the circle of radius

anti-clockwise from the x-axis, this is clearly given by: 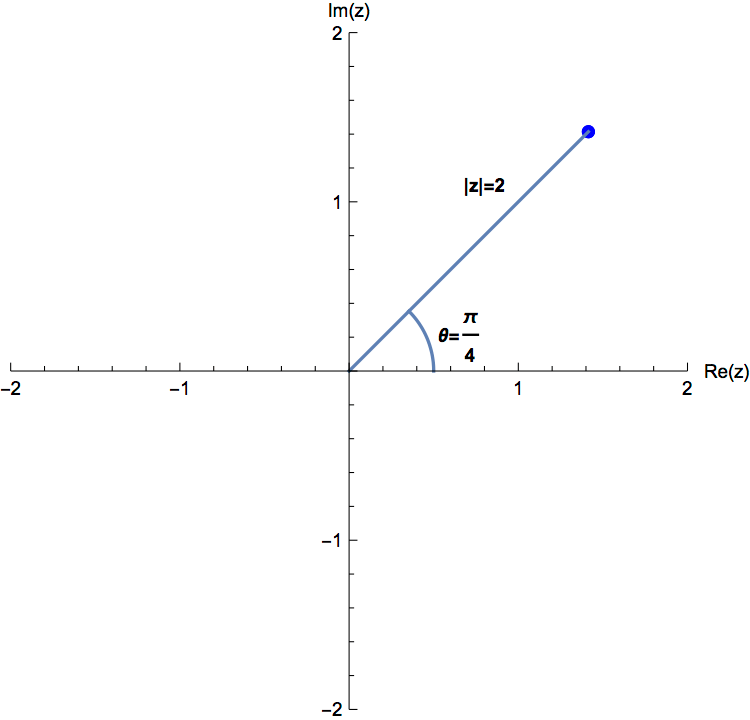 We already know that the magnitude of the complex number

is sometimes called the modulus. The angle subtended between the x-axis and the line between the number and the origin is called the argument of the complex number, and is denoted by

are given, the point in the complex plane is completely specified. It is just as good as giving the values of the real part and the imaginary parts. Of course there is a way to calculate one from the other.

, we can see that the real part of the complex number is

and the imaginary part is given by

. For instance, in the example above we have:

If we had the modulus and argument given by

then this would correspond to the complex number:

Why do we care about having another way to write out complex numbers?

) is very easy as we simply add together the real parts and imaginary parts separately:

However, multiplying complex numbers together in the Cartesian form turns out not to be so convenient.

How about if we write everything in terms of their modulus and argument? If we have two complex numbers where the moduli are

and their arguments are

Well, this is a mess, but actually we can use our double angle formulae to see that this is just:

Which is amazing! So we see that when we multiply two complex numbers together then the result is a complex number where its magnitude is the product of the magnitudes of the two original numbers, and its argument is simply the sum of the original arguments – moduli multiply, arguments add! Much nicer than the whole 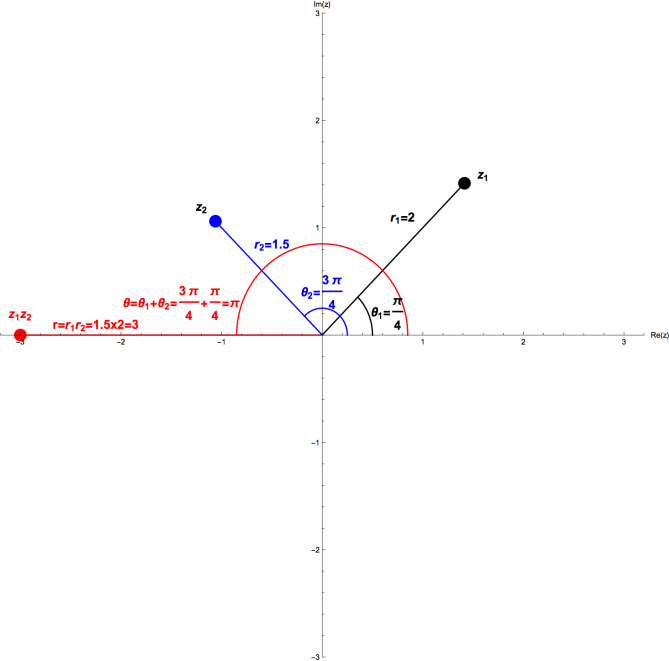 ok, so multiplying numbers together in the so-called modulus argument form (where we write explicitly

) turns out to be really simple, and we can see how to go from the modulus-argument form to the Cartesian form just by evaluating the

and multiplying them by

. How about going the other way? Surely if I give you a number in Cartesian form I should be able to calculate the value of the modulus and argument.

Well, yes and no! Certainly we already know how to calculate the modulus of a complex number given the Cartesian form (

), but how about how to calculate the argument? Well, it turns out that it’s not unique. Of course we can measure the angle between the line joining the complex number and the origin, with the x-axis, but it turns out that we can always add an integer multiple of

onto this angle and we will end up in the same place – ie. we can go around a full circle and end up where we started. It turns out that the argument of a given complex number isn’t unique and is actually given by a set.

For instance if I give you the number

, it is certainly true that

is an argument for this, but in fact it is more accurate to say that:

In fact we have to be a bit careful when calculating the argument of a complex number from the cartesian form, because the fomula depends on whether the number is in the left or right half of the complex plane.

For a number of the form

, the following holds: If the number is in the right part of the complex plane (ie.

is negative (ie. the number is in the left half of the complex plane) then the angle is given by