These will be an addition to the notes already on Vula on complex numbers. Please refer to that document as well as I will be taking a slightly alternative approach on occasion.

Before we get on to talking about imaginary numbers and complex numbers, let’s try and break down our preconceptions about numbers in general. We look at the world around us and see many things which we categorise. We see a computer, a piece of paper, we see other people, we see our hands. These are labels that we use to categorise the world around us, but these objects seem very physical and very real. We rarely question their existence, though if one wants to take the Cartesian view, we should also question the reality we are in. We are not going to go that far, but let’s try and ask about the existence of numbers. I have definitely seen five pieces of paper, but I have never seen a five. I’ve seen the number written down, but I can write down anything I want and it doesn’t necessarily mean that it exists. I can write down a erga[oeiave21 but that doesn’t suddenly bring a erga[oeiave21 into existence. How about a -5? I’ve definitely never seen a -5 though I understand perfectly well what it means. The integers seem to be very good ways of describing, or more specifically counting objects and the negative numbers are a good way of keeping track the transfer of objects from one place to another. I can also ask you to give me 3 coffees, and here I am really asking you to apply 3 as an operation to the object coffee. 3 is acting almost more like a verb than it is a noun. When I describe that there are 30 people in a class, I am really thinking about this as a description, or an adjective. So in the real world, somehow numbers feel like verbs and adjectives. I certainly wouldn’t say that ‘heavy’ exists, but certainly a book which has been described as heavy does.

However, there is a world in which numbers really do seem to be more like nouns than they do in the world around us, and that is in the abstract world of mathematics. In the universe of equations, numbers somehow feel much more concrete and I can manipulate them and transmogrify them from one form to another using a set of mathematical operations which become more and more finely tuned and specialised as we learn more and more mathematics. I can take a 5 and I can apply a

function to it to give me another number. I think of this rather as taking an object and putting it in a machine which turns it into another object. Here 5 is very real, but so is

and so are all the numbers that we’ve ever used. They are simply the objects which are manipulated by our mathematical machinery. Whether or not they exist as objects around us isn’t very important for our use of them in the mathematical universe.

Incidentally, I have here separated the real universe from the more abstract, platonic, mathematical one, but it is fair to say that we have found mathematics as the best language with which to accurately describe the real universe. All of our models and precise descriptions of the universe are built using mathematics, and it acts as an incredible way of describing the laws of nature. Which came first, the mathematics or the universe? That is not a question I am going to get onto here, but it’s certainly a profound one!

A foray into a new number system

OK, so we have a mathematical world of numbers and we can manipulate them. Thus, we should be perfectly happy to have some more ingredients in that world, that don’t have such an obvious mapping to the things in the world around us. We will discover that actually they help us enormously in the things that we can do with the mathematical machinery. It’s like having a powerful car but not the right fuel to really take it up to top speed. We are about to find out what that fuel is and push the limits of what our car can do!

Previously, if we set up a certain type of quadratic equation and plugged it into our machinery to find a solution, the machinery would jam and we wouldn’t get an answer out. This was a real shame because it didn’t seem to be that much more of a complicated equation than any other that we had studied. We are perfectly happy with solving an equation like:

. That’s fine, our mathematical machinery can deal with that fine, but when we ask to solve something so similar:

our traditional machinery comes juddering to a halt and we get an error message on the screen. In fact when we plot the graph it’s clear that it doesn’t cross the

axis, so it can’t have a solution…can it? Maybe we’re not looking hard enough. Maybe our machinery is fine, but we’ve just fed it the wrong ingredients. In fact, we can find the solution just fine. The solutions are:

You might look at this and go “Absolutely not!” You can’t take the square root of a negative number, but if you plug that into the equation, it works just fine and is a perfectly good solution. What is not true is that

is like the normal numbers that we are used to using. In fact, let’s give this solution a name. We’ll call it

. This is defined as that number which when squared gives

One has to be a bit careful here. In fact we define

not as the square root of

but as that number which when squared gives

. This sounds exactly the same, but the question is really about how the square root function is defined. If you are not careful you can end up showing that

and this clearly ain’t right.

? It’s one of the solutions to the equation above. Plug it in, you’ll see that it works. There’s no funny business going on here. So what if it doesn’t correspond to a number in the world you see around you, nor does

but we don’t have a problem with using that number, do we?

stands for imaginary. So we call

the imaginary number, but in fact it is no more imaginary than most other numbers, it’s just a little harder to understand it because we are used to things which represent a size. Numbers which are not imaginary are called real, but again, this name is probably not a very good name as

is no more “real” than is

Once you have defined this new type of number – a number that squares to a negative number, we open up so many new possibilities. Things that previously would have driven our machinery to a halt are now very easily accessible. With this new number we’ve just upgraded our mathematical machinery so that it can handle so many more problems than it could before.

makes many things much more natural than they would be without it. This is true in many many fields of science and so having

at hand is absolutely indispensable when you want to describe the real world.

However, before we start to use our shiny new ingredient, we have to understand about some basic properties of

by definition, and we will thus for now treat

(noting that we are being subtly sloppy, but not really yet understanding why). How about if we are faced with

. Well, we simply write this as

. Simple, huh! Note however that one cannot do this splitting in general. For instance you might be tricked into thinking that

. For now, just be careful when you split

So, we will get an imaginary number every time we find the square root of anything negative. In fact, this is really its defining feature. Whatever you get will always be a real multiple of

. Each one of these, when you square them will give you back the thing that you start inside the square root with:

So, now we know how to find the solution to

be positive or negative. How about adding two imaginary numbers together. Again, it works just as you would expect:

then you’ve got a total of

. Again, nothing funny to see here!

What about adding an imaginary number to a real number: what if we have

is as simple as you can get it. A number that has a real part and an imaginary part is called a complex number. We can write any complex number as

are both real numbers. With this ingredient you can now solve ANY quadratic equation! Previously half of all quadratic equations would have been impossible to solve because, when you used the magic quadratic solution formula, you would have found the square root of a negative number. Now we know what to do with that. Let’s look at a simple example:

We plug it into the normal formula for solving quadratic equations and get:

Plug those two solutions back in and you’ll see that this is the correct solution to that previously unsolvable equation!

Ok, we’re doing good, we now know what a complex number is and we know how to add and subtract complex numbers. Multiplying is just as easy, as long as you remember that

. So, multiplying two complex numbers together goes like this:

Notice how we put the real part in a bracket, and the imaginary part in a separate bracket.

We have notation for taking just these parts. If we have a complex number

. Don’t be fooled, the imaginary part is the coefficient of

, and doesn’t include the

So, a complex number is made up of two parts, an imaginary part and a real part. We are very used to dealing with numbers lying along the real line, from

. When we want to denote a real number on the

axis of a graph, we just put a point there. Is there anything equivalent for complex numbers? The difference is simply that real numbers have only one dimension – ie. one thing that can change, whereas complex numbers have two things that can change (their real part and imaginary part), and thus they live in a two dimensional space. But this is lucky, because paper is in general more or less two dimensional and so we can still denote a complex number as a point on a piece of paper. Now though we have to draw two lines, and not just one (as we had to for the real line). Now we have the real axis, and the imaginary axis. In the following figure we plot a few complex numbers and show where they lie in the complex plane, also known as the Argand plane. 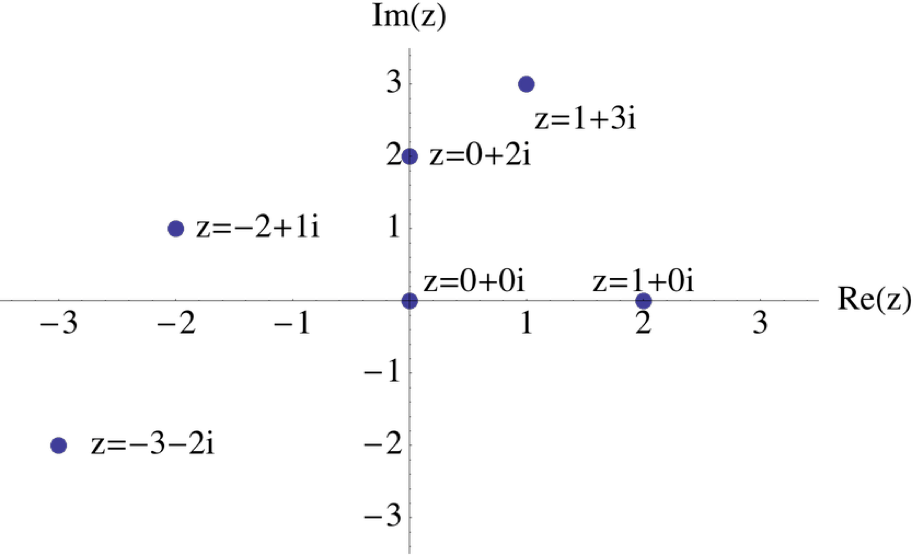 There are some very important properties about the addition and multiplication rules of complex numbers, but I suggest that at this stage you take a look in the resource book notes on complex numbers and they are all laid out nicely there. It will be good for you to read another account of how to think about complex numbers so go there, and then return to the posts which will follow when you’ve read the intro to complex numbers in those notes.