The following is almost certainly going to seem a bit confusing until you’ve seen a fair few examples. Don’t stress now, just try and picture what’s going on and we will build up our understanding as we go along.

Having understood how to calculate the areas between two curves, or simply the area under a curve as a limit of the Riemann sum we can start to think about how to approximate not areas but volumes. If we can calculate an area by adding together small rectangles, perhaps we can calculate volumes by adding together small boxes, or other shapes. In fact we will use not boxes but cylinders, though perhaps not cylinders as we normally think of them.

You  probably think of a cylinder as a tube with a circular cross-section, but in fact that is a particular type of cylinder called a circular cylinder. The general idea of a cylinder is a three dimensional object with a constant cross section. Some examples of this are: 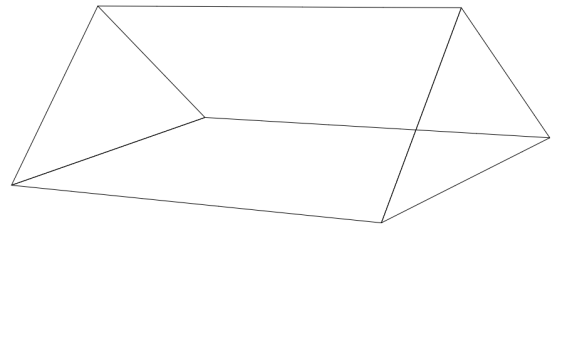 A cylinder is a shape which is bounded by two identical surfaces (the tube with triangular cross-section, the toilet roll or the circular cylinder, etc.). The two surfaces are called

. The cylinder’s length is

. The cylinder is the volume made by joining all lines perpendicular to the two end surfaces. If the area of the base is

then the volume of the cylinder is:

For a circular cylinder the volume is:

For an equilateral triangle cylinder:

We now how to find the area between two curves. The intersection points of these two curves are

and so the area between them is:

So the volume of a cylinder with this face is: 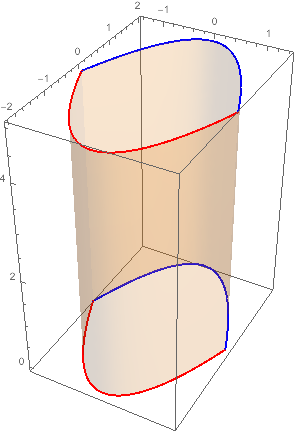 where the red curve

and the blue curve is

(so this would be for

Breaking down a sphere into cylinders

and a circular face with radius

This is shown here: 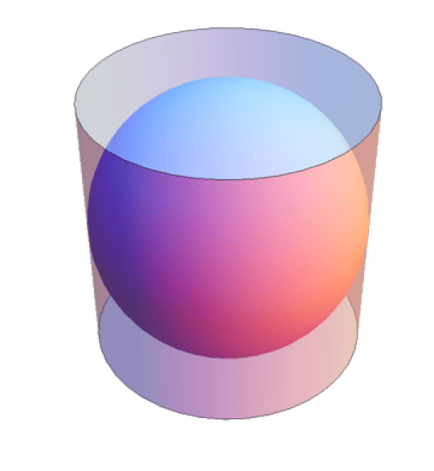 We will call this approximation to the volume of the sphere

and it is given by

. This is clearly not a very good approximation, so we might try and approximate it by more cylinders of varying sizes. This is shown in this figure for an approximation with 4, 8 and 16 cylinders:

So we can draw, these, but can we write down the volumes as the sum of cylindrical volumes? We can certainly take a limit where the widths of the cylinders are very thin and work out a general expression for a cylinder at a particular position within the sphere. In the figure below we see a single, very thin (small

) cylinder at a particular radius

taken through the sphere. 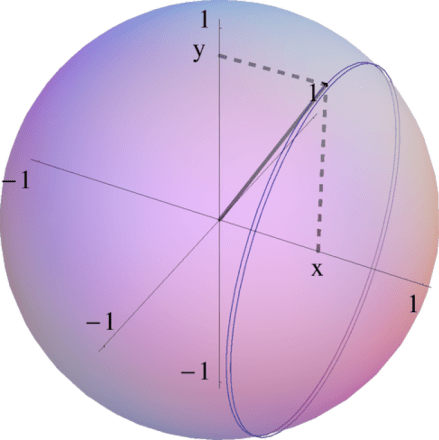 In this particular example the sphere is radius 1, but we can think about a general sphere of radius

. If we take a slice at position

shown in the plot, but because

form a right-angled triangle, we can see that

. The area of the slice is thus

and the volume (where the thickness we now call

which we will shorty let go to an infinitesimal size), is:

So if we have a lot of these slices at different positions, then the total volume of them is:

are the positions of the centres of the disks (thin cylinders). We know how to take the limit of this, and we find that the total volume when we take the number of disks to infinity (their widths to zero size):

So miraculously we used exactly the same trick that we used previously with the Riemann sum for a two dimensional area to calculate a three dimensional volume!

Some more examples of volumes by cylindrical cross-sections

We are very familiar with spheres, but we can define shapes very simply by giving a function and rotating that function around an axis. Let’s look at an example.

We can define an area by the region between the function

-axis, and a line at

. This looks like the left hand side of figure below. We can then image taking this wedge and letting it rotate around the

-axis. If it does this then it will sweep out a volume in the (

) plane which looks like the right hand side of this figure: 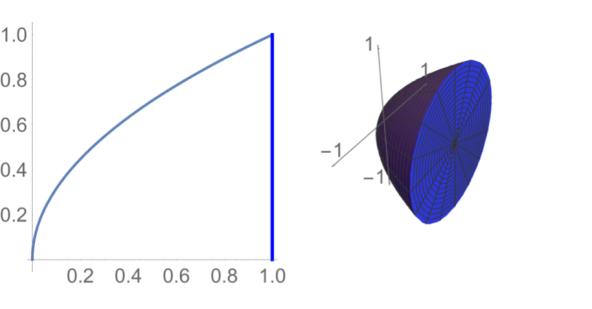 Again, just as we did in the case of the sphere, we can think about taking slices through this shape. Again, the slices will be circular disks. At a given position

, the radius of the disk will be the height that the function goes, which is

and thus the area of a disk at position

and the volume will be

. We can again take the sum of the volumes of all the disks going from

and take the limit that their thickness goes to zero, while their number goes to infinity, to get:

We made a very particular choice in the previous example, to sweep the shape around the

axis instead. This will give us a shape like: 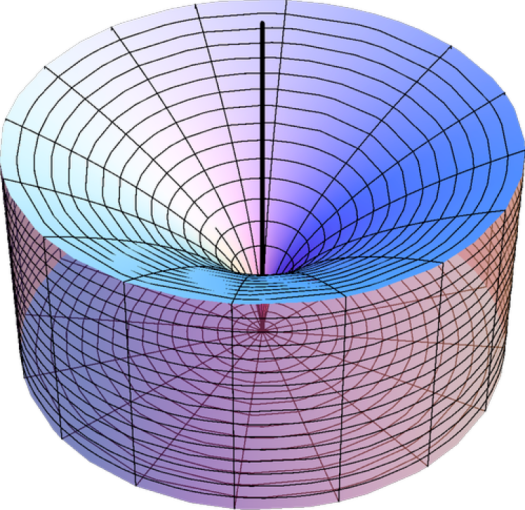 This time we want to take horizontal slices through the figure. The thickness of the disks will now be

because the thickness is in the

near the top of the shape, they annuli will be very thin, but towards the bottom they will be very thick, with only a small hole in the centre. The figure below shows what would happen if we approximated the shape by five disks and then pulled them apart for effect

For a disk at a given height up the

axis, the inner radius of the annulus is going to be

. The outer radius is always going to be 1. So the area of of one of the annuli at position

. The volume of one of these disks is then:

and thus we can add them all up in a Riemann sum and take the limit, to get: