This post is not going to be very maths-heavy but will include some concepts from the area of graph theory which we will use in an unusual setting.

The starting point of our culinary adventure will be a piece of text, taken from a website of flavour pairings here.

We see here that we have a piece of text which we can copy and paste into our Mathematica file. The text starts:

The aim of this exercise will be to take this data and try and write some code which will automatically generate recipes for us (at least in terms of the combinations of ingredients which will go well together).

At the moment the whole thing is one very long string (data made up of symbols which don’t have a specific meaning as a command in a programming sense), and we would like to split the string up into more bite-sized (haha!) chunks which we can put into a lovely visual form and then pull out recipes from it.

I will add a second post regarding exactly how we will do this, but the topics which will be needed are:

We will show in the detailed post that we can extract from the text all the details about which food goes well with which in a simple matrix form. How can we display this graphically? Well, we can think that every ingredient is a point, and every statement “A goes well with B” is a line joining ingredients (points) A and B. Thus, the information is well represented as a graph. Not a graph in the sense of a graphical representation of a function from x to y (f:

), but a graph in the sense of a series of vertices (also called nodes) and lines joining them .

Graphs are ubiquitous in the natural description of many areas of life, from computer networks to real life social networks, from evolutionary biology to, apparently, gastronomy! (Postscript: Apparently something similar has been done before – see here) 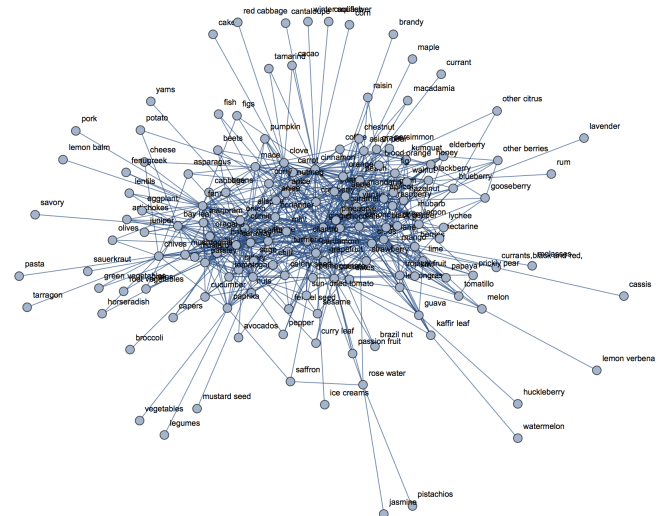 well this is useful for neither chef nor beast…

In fact the total number of ingredients in the list is too large to plot the whole thing on a single page, and to be able to read the details, so let’s plot just a subset of them (also known as a subgraph). Here are a few ingredients (randomly chosen) displayed in a graph: 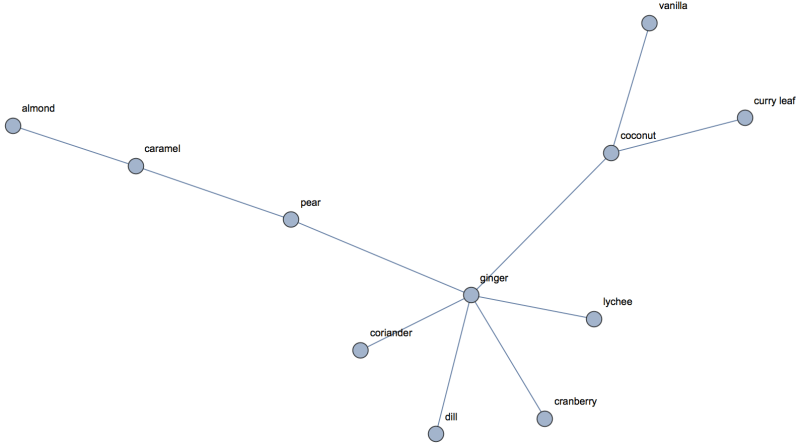 So, what is a recipe? Well, we can think (in a very simplified way) that a recipe is a set of ingredient where each one goes well with each other. See the video of Grant Achatz from Alinea here:

What does this mean in the sense of the graph? Well, it will be a set of points where each point is connected to every other in the set. This can also be described as a totally connected subgraph, also known as a clique.

Thus, if we find the cliques in the graph, we will have found recipes!

We can ask for cliques of a given size, so, for instance the following graph has a single clique with 3 vertices: 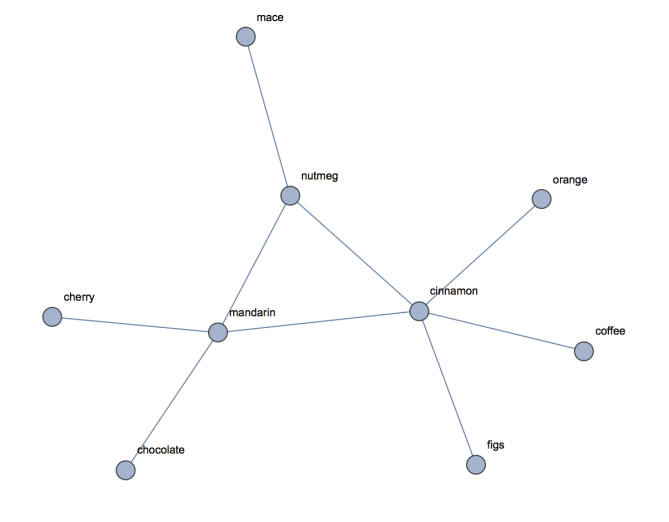 For instance, we can ask for cliques with 7 elements in, and (a subset of) the answers are:

Actually Mathematica only finds cliques like this which are not subgraphs of larger cliques (known as maximal cliques), so we have to work a little harder to find all 40 or so cliques of size 7.

Well, that’s kinda neat – we’ve just found sets of 7 ingredients, all of which go well with one another. For any cooks out there, these combinations won’t be particularly surprising, though the allspice, apple, cardamom, cilantro, clove, coriander, ginger combination is perhaps a little unusual and sounds quite a bit like a variation of a Vietnamese salad.

We can also ask about ingredients which might go badly together – these may be thought of as those ingredients which have the longest path in between them. Given a graph g,  we can find these very simply with the command:

Don’t worry about the syntax here if you are not familiar with Mathematica – this is just asking for the maximal shortest path between ingredients.

This gives a large number of different pairs of ingredients which have 4 ingredients in between them. For instance apparently eggplant and white chocolate wouldn’t make a great pairing according to the following:

However, I’m not completely convinced about some of the supposedly bad combinations.  For instance, apparently maple and watermelon are very bad flavour pairings. This certainly doesn’t seem like a bad combination to me and so I think that we are seeing the limitation with the relatively small number of flavour pairings shown in the text. We would need a more comprehensive flavour pairing list in order to investigate this further.

There are some rather surprising combinations of flavours which go well together. For instance, caviar and white chocolate is supposed to be a good pairing due to the presence of certain amine compounds in both of them.

Ok, so these are some of the simple things we can play around with. In the next post I will show how we actually coded this in Mathematica using concepts like Editdistance and some simple graph theoretic commands.

Part 2 can be found here.