When least is best, by Paul Nahin – a review 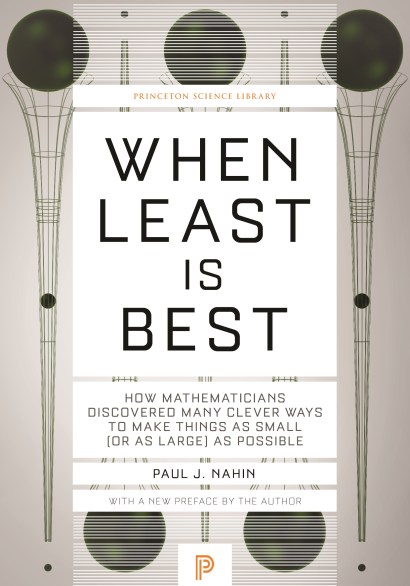 For my review of Nahin’s superb book “How to fall slower than gravity”, see here.

While not often taught as a topic with such wide-ranging uses in maths classes, finding the maxima or minima of functions is one of the most important areas in all of applied mathematics. I say this as a practitioner of machine learning, where most of what we do is trying to find the minimum of a loss function, and as a physicist where in quantum field theory, the dynamical equations come from trying to extremise an action. While these areas aren’t discussed in the book (the closest it gets is looking at the classical Euler-Lagrange problem), to get students to think about how useful it is to find the maxima and minima of a function is really a powerful thing.

Nahin takes on this challenge and succeeds in the same way that he succeeded in making the problems in the previous book of his that I reviewed both fascinating and easy to follow. One might imagine that the book would dive straight into using calculus to solve extermination problems, but this only comes later, after showing how much can be done without differentiation, using some fiendishly clever techniques and methods of argumentation.

The book goes through some 40 or 50 different problems where slightly different techniques are developed and as is his style, each one is given a rigorous treatment, with plenty of explanation to go alongside the mathematics. Those who know me well may not be surprised that discussions of optical paths in the reflection of drops in a rainbow were one of my favourite examples, which are given space in both the pre-calculus and post-calculus worlds.The problem of where to stand in relation to a picture on a wall so as to get the optimum view is also surprisingly complex and discussed in a number of contexts through the book.

In the last section of the book, problems of dynamical programming are covered, which is also an area close to my heart due to their relation to Reinforcement Learning and I think that this section should be suggested reading for anyone who has read Sutton and Barto and wants to know more about the mathematics of this topic.

Overall, again, Nahin has written a beautifully clear, fascinating book on a topic which is truly vital to so many areas of science and I would recommend anyone who enjoys puzzle solving and having new tools to tackle old (or new) problems should read it.