The final round of the South African Mathematics Olympiad will be taking place on Thursday, 28 July 2019. In the week leading up to the contest, I plan to take a look at some of the problems from the senior paper from 2018. A list of all of the posts can be found here.

Today we will look at the fourth problem from the 2018 South African Mathematics Olympiad:

be a triangle with circumradius

be the altitudes through

respectively. The altitudes meet at

be an arbitrary point in the same plane as

. The feet of the perpendicular lines through

respectively. Prove that the areas of

Once again, we begin by creating a diagram. Again, since I already know how the solution plays out, I’ve drawn in the circle that passes through

. We do know yet that these points are concylic, however, as it is not given directly in the problem statement. 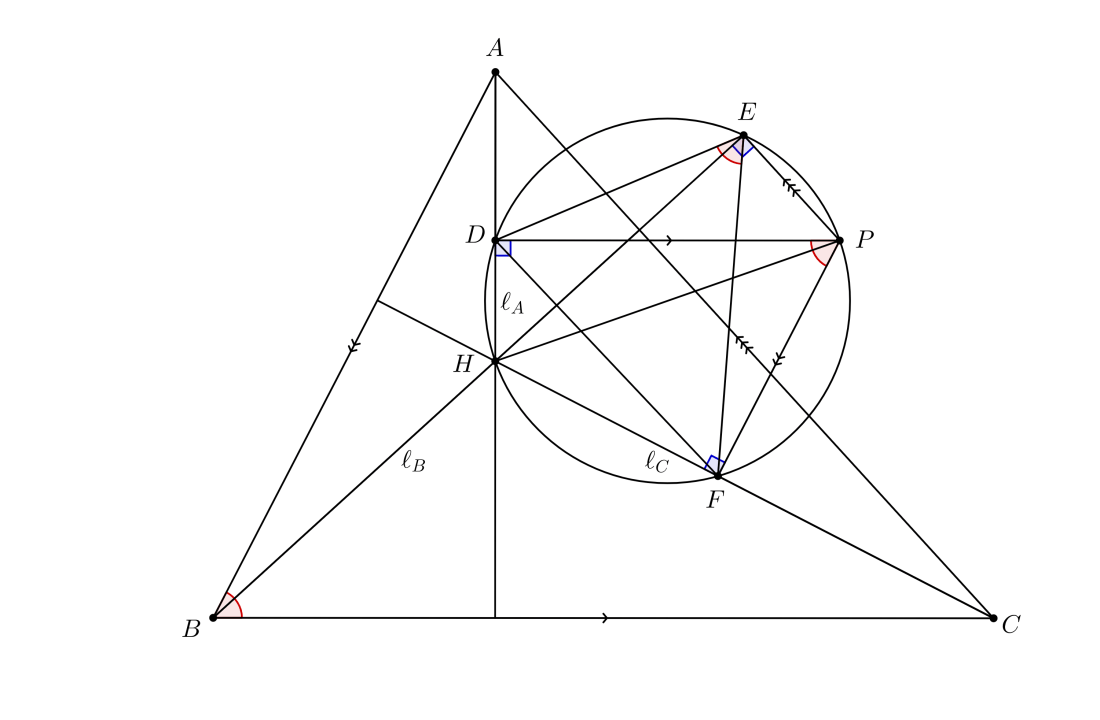 were similar to triangle

. This may be too much to hope for, but in the process of trying to prove it we may discover some useful relationships between the angles in the diagram, or ratios of side lengths that we could use in one of the other approaches. It certainly doesn’t hurt to fill in as many angles as possible using standard “angle chasing” techniques, and if that is enough to solve the problem then we will be very happy indeed.

is the length of the diameter of the circumcircle of triangle

were similar to triangle

, then we would hope that the length of the diameter of the circumcircle of triangle

so that we have the correct scale factor for the two triangles. The easiest way in which this could be true is if

were to lie on the circle with diameter

. As mentioned earlier, this does in fact turn out to be true!

We note that a point

lies on the circle with diameter

if and only if

has this property since

is the foot of the perpendicular from

, being the foot of the perpendicular from

, also has this property, and so does the point

We now try to find the angles in the triangle

. We note that since

is cyclic, we have that

are both perpendicular to

are parallel. Similarly, we know that

are parallel, and so the angle between the lines

is equal to the angle between the lines

would be a parallelogram, and

would be opposite each other in this parallelogram, and hence equal.) We thus have that

. A similar argument shows that

, and so the triangles

are similar, just as we had hoped.

One does need to be careful. In this problem, different configurations of the diagram may arise depending, for example, on whether

is inside or outside of the triangle. The arguments that we used may not be valid any more in a different configuration of the diagram. We may find, for example, that instead of two angles being equal, they turn out to be supplementary. (For example, two angles may no longer be corresponding angles in a cyclic quad, but may instead be opposite angles in a cyclic quad.) In fact, if one reads the above post carefully, one will realise that the argument given to show that

doesn’t work exactly as written to show that

One common way around this pitfall is to use so-called directed angles. I do not plan to talk about this topic in this post, but I would encourage the reader to find out more about this method and to work out how the argument above needs to be changed so that it works in all possible configurations of the diagram.

About the Author: Dylan Nelson

Dylan is a masters mathematics student at the University of Stellenbosch. When not doing mathematics, he enjoys sleeping, eating, and drinking coffee or wine. You can become one of his best friends, or possibly even one of his favourite people in the world, by facilitating any one or more of these activities.