The final round of the South African Mathematics Olympiad will be taking place on Thursday, 28 July 2019. In the week and half leading up the the contest, I plan to take a look at some of the problems from the senior paper in 2018, and have already written about the first problem

The second problem from the 2018 South African Mathematics Olympiad was

. It is given that

. Determine the value of

The first step of solving any geometry problem should always be to draw a sketch. This helps you to understand how different parts of the figure relate to each other, and an accurate sketch may help you to form conjectures. Sometimes having a deliberately inaccurate sketch on hand is also helpful as it may help to avoid circular reasoning. For example, if three points in a sketch appear to be collinear, and you are trying to prove that this is in fact the case, then when working with an accurate sketch you may inadvertently assume that the points are collinear in your proof.

Below I have included a sketch which is more accurate than it needs to be because when I was creating it, I already knew what all of the lengths in the problem work out to be. 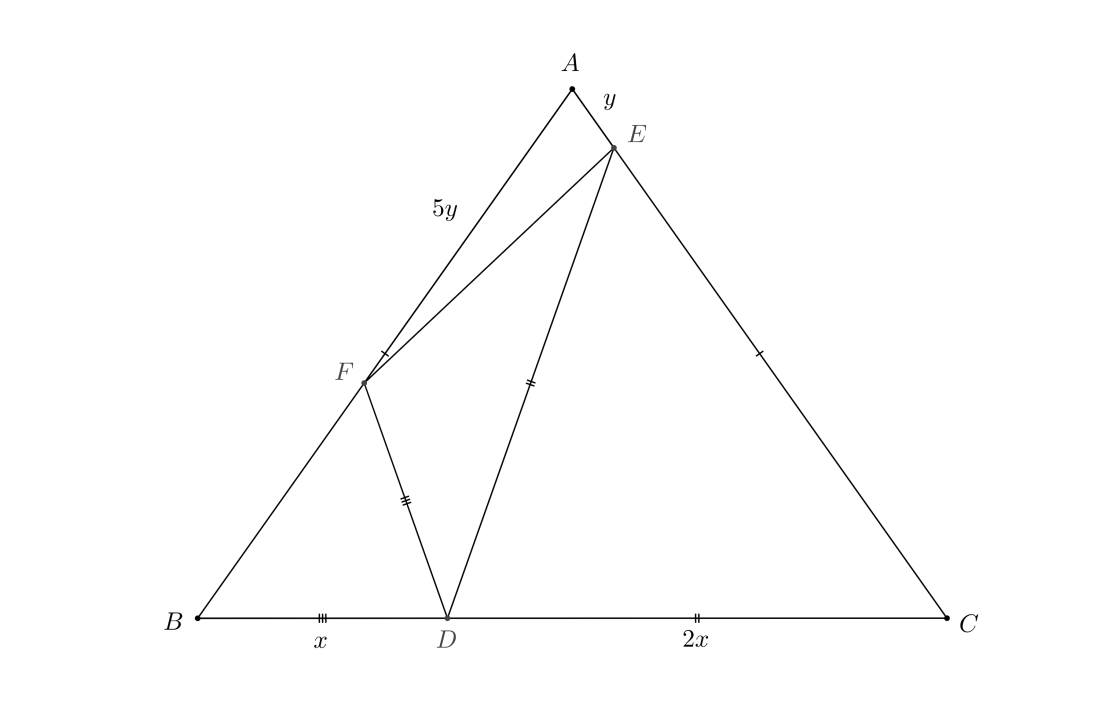 , it may help to relate these lengths to other lengths which we are given information about. For example, we know that

, so if we could also relate

, then we would be able to relate

The key insight that allows us to relate

is to realise that the triangles

are similar. This is because triangle

is isosceles, and so we have that

, and so the two triangles have two pairs of corresponding angles equal. We are thus able to conclude that

We don’t appear to be any closer to solving the problem, since we now have to figure out how

, and this appears to be at least as difficult as the original problem. We do, however, know that

, which we can use to our advantage because we have been given information about how

relates to other lengths in the figure. Specifically, we know the ratio of

, and so it would be helpful to work with the length

in order to make further progress.

We were earlier able to relate the ratio

by noting that triangles

are similar. We could do the same thing with triangles

to relate the ratio

instead. Since we know the relationship between

, we would then be able to set up an equation for

Using this approach, we obtain

From this we obtain that

and so we now know that

. This is not quite what we wanted. We hoped that the equation would allow us to determine

, but we have still obtained some valuable information.

This unexpected piece of information is in fact enough to finish off the problem. We return to the relation

Since we know know what

is as a fraction of

, and we know what proportion of

is equal to, we can rewrite

, and thus obtain an equation for

after all. Doing so gives us

and so we obtain that

which finally allows us to determine that

About the Author: Dylan Nelson

Dylan is a masters mathematics student at the University of Stellenbosch. When not doing mathematics, he enjoys sleeping, eating, and drinking coffee or wine. You can become one of his best friends, or possibly even one of his favourite people in the world, by facilitating any one or more of these activities.