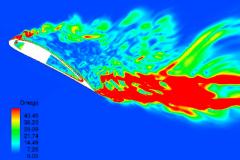 The course of Partial differential equations (PDEs) usually is a tough one. There is a number of factors contributing to this toughness:

This series of posts aims to demystify PDEs and show some general way of handling PDE problems by combining physical intuition and mathematical methods. I am a strong believer in computational approach to mathematics. If you wish, it also can be called an engineering mathematics. They core idea of it: we must get an answer. With the examples presented here we will go all the way from formulating the problem to getting the solution. This also means that on the top of PDEs we would need to deal with another tough mathematical topic: numerical methods. But lets not to get ahead of ourselves and first find out “why PDE?” or using Shakespearian pun

TO PDE OR NOT TO PDE: THE ORIGIN OF PDES

The reader may recall that development of the ODEs field was prompted by the need to solve mechanical problems. Newton’s second law lands itself quite naturally to the initial value problem for an ODE:

where the dot means the derivative with respect to time.

Newton’s second law has slightly more generalized form known as conservation of momentum: the momentum of the closed system is conserved. So, in the Newton’s law on the left hand side (LHS) we see the rate of change of the momentum, which in the closed system is supposed to be zero, and on the right hand side (RHS) is an external force. There are a few physical quantities that are known to be conserved: mass, energy and momentum. A peculiar one is entropy: it actually grows in the closed system, but this is another story. For our further discussion, momentum is not an intuitive quantity to work with. Energy offers an easier alternative since most of the time by “energy” we would mean “internal energy” which is almost always is interchangeable with “temperature”, and “temperature” is something that is quite easy to feel.

of a point can be expressed as

unless there are some external sources. The above equation is written for one point only. Its extension for multiple points is trivial:

Yet another extension is to allow for the continuum of points. In this case the conservation holds for some aggregation of particles. Let

can denote the initial position of an individual particle. 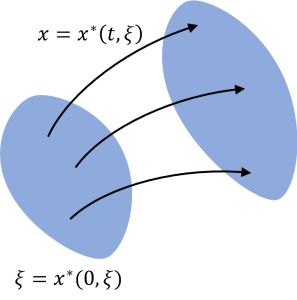 Conservation of energy for the same aggregation of particles of mass

is mass density. Since this equation must hold for any particle aggregation, it follows that

. This derivative is known as full or individual and it is customary to use full derivative symbol for it. Here and later the star is used to denote the function that tracks an individual physical particle, this is so called Lagrangian view.

Lagrangian view, however, is not convenient in practice. Consider, for example, a river or a canal. We are far more likely to be interested in, say, temperature of water in a particular place. But there are multiple particles passing through the place, bringing different energies and, thus, temperatures with them. What we want is called Eulerian view. There is a way to write down the conservation equation directly in Eulerian form, but it is instructive to see how we can transform Lagrangian form into Eulerian.

be the trajectories of particles (remember, there is the whole continuum of them) with the parameter

being the initial position of a particle,

. Let’s assume for a moment that particles do not collide. Mathematically it means that the trajectories can be inverted to find initial particle position

that happen to be found at time

We will leave the case of colliding trajectories for a moment, but we shall see later that there are physical processes that have this kind of behavior. Let’s substitute the above expression to the energy density function,

. The question becomes how to express the energy conservation law in terms of function

, substitution of the trajectory

would result in the energy density of the particle

denotes the velocity of the particle

. Using the inverse of trajectories (2), it can be transformed into Eulerian velocity field

While you catching your breath, let’s note a few things about this equation:

So, we have come up with the PDE in our attempt to describe a physical law. The kind of equation that we have so far is first order linear equation. By including additional effects, such as heat conduction (or diffusion for mass) or chemical reactions, we can transform this equation to second order and make it quasi-linear or even non-linear. However, let’s pause on the first-order equations as they are quite interesting. One of their most interesting and bizarre property is the propagation of discontinuities. And this will be the focus of the next post.

About the Author: Alexey Cherkaev