Note that every element in set A is also found in set B, however, the reverse is not true (B contains elements 4, 5 and 6 which are not in A)

Again, we can see that every element in set A is also found in set B and similarly, everything in B cannot be found in set A. B contains negative and odd integers, which are not in A.

Suppose A and B are sets. If every element in A is an element of B, then A is a subset of B and we denote this as

If B is not a subset of A, as in the above cases, then there exists at least one element, say

Hint: look at what sets y is in

Every set is a subset of itself :

, where B is any set). To understand this, let’s look at the following case:

Hence every element that contains at least one element (i.e. a non-empty set), can have all its elements removed until only the empty set is left. In this sense, we can think of the empty set as reaching the “simplest possible form” for the set.

If we start with the empty set, there is nothing to remove. So we are at “simplest form” for our set.

We can also imagine that we start with the empty set before we add elements into a set. Thus we say every set has a the empty set as a subset.

So the additional subsets are made by taking each element and forming single subsets, then combining the elements with all possible combinations.

D has three elements: Q, 2, and { }. So we know we can make single subsets out of each element, then we can match the elements in different combinations to make the other subsets:

Note: In both of the above examples, we had 3 elements in the sets C and D. This resulted in 8 subsets (i.e.

Since E has 1 element,

, so the possible subsets are:

Since set F has one element, the empty set, hence has subsets:

Note: Again, in the above examples, we had one element in sets E and F which resulted in 2 subsets: the empty set and the set containing the one element (i.e.

We can see that there is a common method of determining how many subsets a finite set will have:

Look at the following examples to understand the difference between a subsets and the elements of a set:

is a set, not an element. 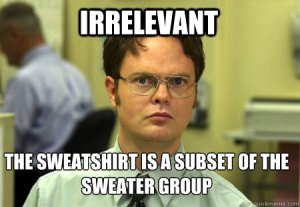