The confusion about discontinuity

Whilst reading Mícheál Ó Searcóid’s book Metric Spaces, I found out about a nuance in the definition of continuity that I was not previously aware of, and something which may be taught incorrectly at high schools. M. Searcóid states that a function such as tan(x) is continuous (read the page here). The definition of continuity at a point is based on the fact that the function has a value at that point (if a function is continuous at x = a, then f(a) has a value in the expression |f(x)-f(a)|<ϵ). However, following M. Searcóid’s line of thought about continuous functions, it does not make sense to consider points at which a function is not defined. If we were asked to prove that the function is ‘discontinuous’ at a point, we would need to show that the condition for continuity at that point is false. And the negation* of the condition for continuity would not make sense at a point where the function value is not defined. In this way, I think that high school mathematics may often overlook this nuance in the definition of continuity. One usually thinks of continuity in a setting where a function is mapped from a set of real numbers, but let’s quickly extend this idea to a more abstract setting. If X is a metric space, and b is not an element of X, then is a function f:X→X, that is otherwise continuous on X, discontinuous simply because it is not defined at b? One can clearly see the absurdity in this, and in the same way, we should only consider the subset of the real numbers that is the domain of a function when asking questions about continuity.

Here are some examples:

is a continuous function, because x = -2 is not in the domain of f, the domain being

. There is no discontinuity at x = -2 nor is the function continuous at x = -2. The function is simply not defined at x = -2. It is as if the ‘world’ that f ‘knows’ does not include the number -2 in its domain—how could it ‘imagine’ otherwise?

A similar example, and much like the argument for the tan function,

. Lastly, a jump discontinuity only exists if the function is defined at the jump: 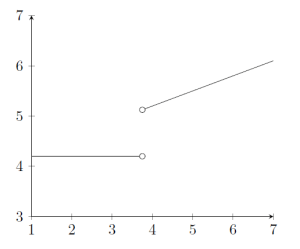 is a continuous function, whereas

What do you think?

About the Author: Aidan Horn

Data analyst and labour economist. In my BSocSci, I majored in mathematics. I am involved with mathematical economics and econometrics, in my work in the School of Economics, at the University of Cape Town.