in each term. It is homogenous because there is no term which has no powers of

(ie. the right hand side is not a constant), and the coefficients

are any real numbers (though you can extend this to having complex numbers very easily). We will see that depending on the relationship between these numbers (

) we can have very different behaviour of the equation. Let’s first of all rearrange this equation and see what it says:

This says that we are looking for a function whose second derivative at any point is linked only to its first derivative and value. In fact we can guess a solution to this equation because we already know a function whose derivatives look very much like the function without any derivatives. These are exponential functions. Let’s take the original equation and plug in a trial solution. Let’s guess that the solution might look something like

for some value of

. First we plug this into the original equation and see if this is a solution:

This can be rewritten as:

is known as the characteristic equation for the differential equation.

Check that you understand where this comes from. We hoped to find a solution to the equation, but clearly this will only be a solution if either

. The former can’t be true for all

and that’s not a very interesting solution. The latter however is a good constraint and says that:

This means that the solution is:

Check that this is indeed a solution. In fact we can see that in general there will be two solutions (except when

Check that the solutions to this equation are

Now the linearity of the equation comes into effect. If

is a solution then so is

. This wouldn’t be true if the equation wasn’t linear or homogeneous.

are two solutions to a differential equation

, then so is the combination

and also an initial gradient of

. Or you can fix the two constants by being given the value of

at two different values of

. Having the two constants

Two solutions to a differential equation are said to be independent if one of them is not a constant multiple of the other. ie.

are not independent but

are also independent solutions. Then any solution can be written as

for particular choices of

Now, this means that as long as we can find two independent solutions, then we have found all of the solutions. This is the same statement that for a first order linear equation, as soon as we’ve found the general solution which includes a single integration constant, then we’ve found all of the solutions. It turns out that there are three different possible scenarios, depending on the particular constant coefficients in the original differential equation. We will deal with them all separately.

We are interested in finding the general solutions to the differential equation:

The three scenarios are:

Then there are two solutions to the characteristic equation, call them

, and the general solution to this equation is:

are fixed by initial conditions.

Then there is a single solution to the characteristic equation, call it

. It turns out however, that in this case, and this case only, there is another type of solution to this differential equation, which is of the form

. Thus, the general solution to this class of equations is:

. So, we can write the two general solution as:

Where we chose to write the complex exponential in

form. If we choose

then we can see that there is a solution which is

then there is also a solution which is

. These are two good, independent solutions to the original equation (you can check this) and thus we can write down the general solution with two new integration constants:

multiplied by periodic functions, the frequency of which is determined by

Let’s look at an example of each of these three classes of solution:

and so we are in the first class. The solutions to the characteristic equation are

and so the general solution to this equation is:

If we are given the initial condition

then we can simply write:

and, after taking the derivative of the solution:

These two equations can be solved simultaneously and give the coefficients:

So that the particular solution with these boundary conditions is:

With the same boundary conditions as in the previous example. Show that the following is the solution:

Thus the solutions to the characteristic equation are

. This means that in our previous formulation,

. So the general solution is:

If we set the boundary conditions as

then the particular solution is:

In the following figure we plot a few different particular solutions to this equation with different boundary conditions. 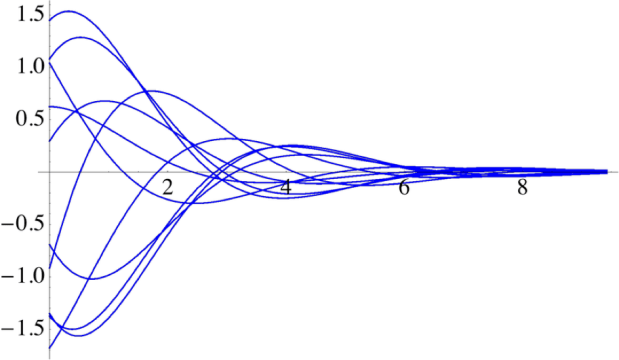 Solutions to the equation

with different boundary conditions. All of the solutions are trigonometric functions multiplied by decaying exponentials but the initial position and initial gradient affect the overall solution

Finally we will consider an equation which only has imaginary solutions to the characteristic equation. For instance:

The characteristic equation has

and therefore the solution has

Check that indeed this is the solution to this equation. This is a very important equation because it produces purely periodic behaviour.