are any functions of

is of this form where

. The reason that these equations are simple in theory is because we can rearrange them to be:

ie. we have all the

stuff on one side and all the

stuff on the other and then we can integrate both sides:

and that’s it. As long as you can do the integrals, you can get a function

. let’s look at some examples:

here we have one constant of integration from each side of the interval, but because they are just constants, we can put them into one constant and call it

we can then rearrange this to give:

We can then call

just a constant, and let’s call it

because we can see that when

is just going to be given by this constant:

This has two solutions (one where

is positive, and one where it is negative), so we can choose one of them, depending on the initial condition for

. If we are told that for

If we are told that for

so we have found the general set of solutions (and here, two particular solutions) to the initial differential equation.

Given that you can already integrate, basically that is all you need to know about solving separable differential equations, but let’s take another couple of examples:

given the initial condition that at

. We rearrange the equation to get the integral:

This gives (taking the two integration constants and writing them as one:

, where we have absorbed a factor of 2 into

. Now we want to find the value of

given our initial condition, so we set

and so the particular solution is:

In the figure below we have plotted this solution, along with a number of solutions with other initial conditions.
figure: 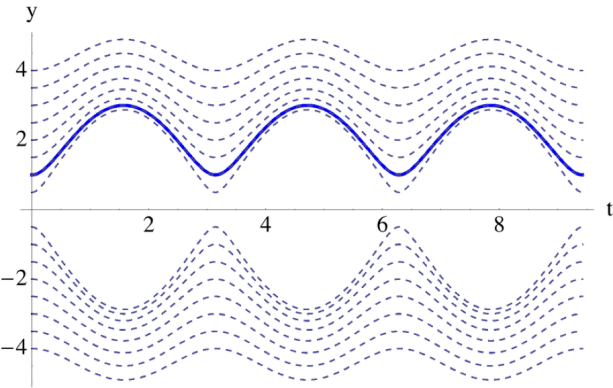 Solutions to the differential equation

in the thick blue line.

Lets look at another example:

. Again, we rearrange the equation to be an integral:

which is solved by

. So the particular solution that we are interested in is:

Note that this only makes sense for

which has two solutions:

. Only the first of these contains the point

and so this is the branch that we are interested in, so the solution is given above and is valid for

. The particular solution along with several other solutions are shown here: 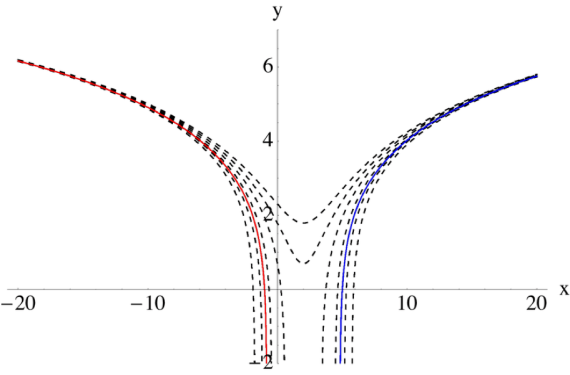 Solutions to the differential equation

in the thick blue line. The thick red line has the same value of

as the particular solution we are interested in, but it is disjoint from that solution as it never reaches

How does the integration tie in with Euler’s method. Well, in Euler’s method we are slowly adding up more and more change as we move along the

direction and it is telling us the total

that we have got to at any one value of

. Integration is just adding up and so Euler’s method is just the adding up of the little bits in discrete steps rather than as a continual function as in an interval.

Reminder: A way of thinking about these equation

Differential equations seem a bit mysterious at first, but we really can take them as extensions of algebraic equations. When you are given the equation:

You are being asked to find that number (or those numbers) whose square is equal to 4 plus itself. Similarly when you are given then differential equation:

You are being asked to find the family of functions

value at any one point. You should be able to go anywhere on one of these curves and the relationship between

and the gradient of the line at that point should satisfy the equation. How do you know that it does? Well, just plug in the function you believe to be a solution into the differential equation and if it does indeed give you zero then you’ve found a solution.