This property is known as Lipschitz continuity. A function that satisfies this condition is said to be Lipschitz. We shall see that whenever we require this condition, on up coming situations, wonderful things happen!

We note that the solution to the differential equation above is a function:

We can write this equation as

under suitable conditions–for example, it is sufficient for

One might then ask if it is possible to approximate this integration (which is something that is needed in order to solve problems numerically, as opposed to analytically) because if we can do that, then we can easily compute the solution to the initial differential equation. There are a couple of ways to do this. We give examples.

Notice that these method use only neighbouring discretisation points to do the estimation. It is possible to do more than this, and use more points. One method that allows you to do this is what’s known as the linear multi-step method. This is a numerical scheme of the form

where in the same way we can specify the coefficients

-steps instead of only one step to do the approximations. We won’t devote much time to this, because will not be seeing it again any time soon, but it is a really, really powerful tool, and offers great insight into numerical analysis as a field.

More recently, researchers at found themselves with the following problem: Around 2017, it became clear that very often using deep neural networks as we know them can be quite inefficient. For example, if one had two networks –one deep, and the other shallow–then it was observed that the accuracy in the larger network would tend to saturate as you add more layers. And this meant that gradients were not efficiently computed. As a way around this the following was done.

If we define a neural network, in the usual sense, as a sequence of transformations:

is a non-linear transformation and

is an affine transformation.
Then we overcome the stated problem/s by considering a model of the form:

This is precisely what is known as a residual network.

The idea is that we would like to approximate a function

, and instead of approximating this function we consider the function

then we approximate this instead as

in the residual net equation. After each unit, we concatenate

An example of this kind of structure is given below.

This is a single residual unit.

It turns out that this formulation makes training much easier and improves accuracy for reasons we are going to explore in the next blog post.

It is also quite interesting to notice that the form

. In fact, with the generality of the non-linear function, we can write the residual network transformation as

In this form, the relationship really stands out. Note that here

is just a constant, and need not be the time-step, and we put it just to ease the reader’s intuition about what follows.

Notice that a residual network can be written as:

are neural network parameters as we saw above,
and so

This takes the form of a numerical derivative for

where the step is

, and then we added many layers?

In this case we get

which we realise as

the input, so this is simply a differential equation with an initial condition.

As before, we can write

We can compare the fields of these models using the following picture: 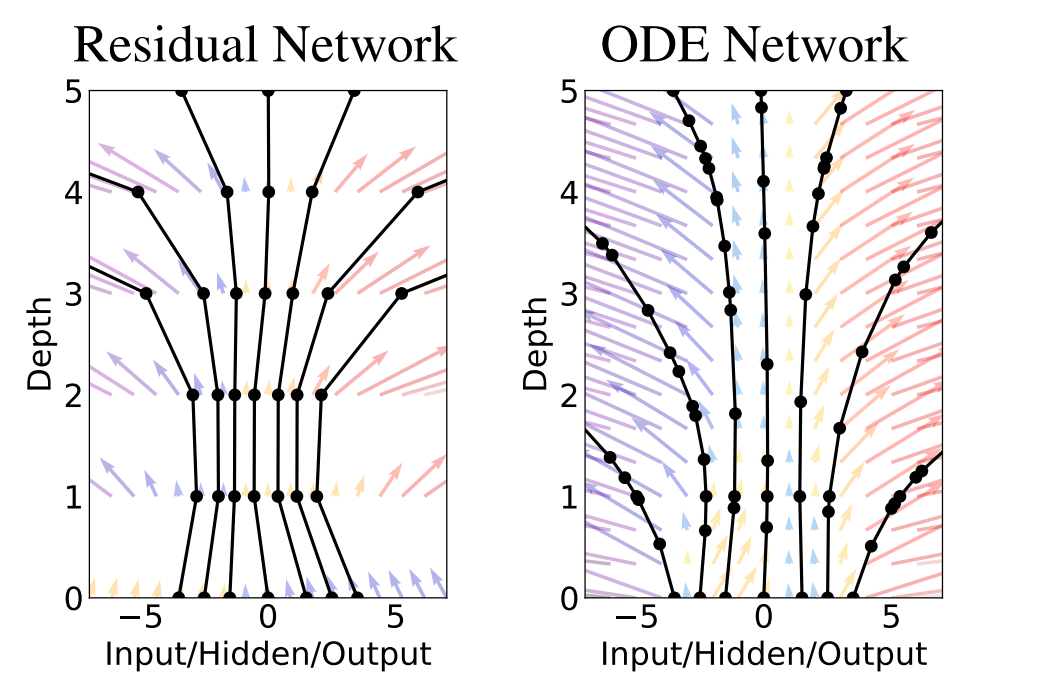 To summarize everything:
We saw that ordinary differential equations are creatures than can be studied and solved numerically. After this, we visited the problem of error saturation and gradient degradation in deep networks at which point we also introduced residual networks. This led us right into neural ordinary differential equations. We will spend some time on the functionality of these two methods, which will take a few blog posts in the near future
.