So you may or may not be familiar with something called radians. No, I’m not talking about your graphics card. Most people are familiar with the concept of angular measure using degrees: it’s simply

of a full revolution. So what’s a radian? As you can guess: just another unit of angular measure. This is the best graphical explanation I’ve found:

Cool, hey? A radian is just “the angle made when the radius is wrapped round the circle” (MathsIsFun). The diagram shows us there are

radians in a circle. If that sounds oddly familiar, it should, because it’s analogous to

radii making up a circle’s circumference. Using the following, we’re ready to write the conversion factors:

It’s a rather simple conversion to remember, until you start getting them mixed up. Here’s a tip: radians tend to be small and written in terms of pi, whereas measurements in degrees are often large and pi-less (like 230°). So to get from radians to degrees, multiply by a large number and get rid of the pi, so it’s fairly obviously which fraction to use.

So what’s the point of telling you to use a new unit? Besides annoying you, that is. Degrees were perfectly capable, you might say. But admit it, some units are just more practical than others. Sometimes it’s just for convenience (like using metric because of the easy conversions), but then sometimes equations won’t even work with the wrong units (such as in the Ideal Gas Law). The same with radians. Here are some examples of where degrees will drive you bonkers:

We know the circumference of a circle is

(well I hope so). So what if you only wanted a portion of that, say an arc length spanning over a particular angle of the circle? Simple, multiply the actual circumference by your angle over the angle of a full revolution. Using radians, the arc length (s) would be:

Cute little thing. If you tried that with degrees, you’d get some hideous equation. Better to stick to radians.

Depending on your knowledge of Calculus, you may have come across the following derivative:

What you may never have thought to do was to try plugging in some values in degrees and plotting the function and its derivative. You’ll quickly realise something’s seriously wrong. Yup, that derivative is only true when theta is in (you guessed it) radians. Using degrees, the derivative would look something like this:

You’d still have use the conversion, nogal!

These are just a few examples arguing the case, but the truth is I don’t know all the reasons why “grown ups” in mathematics use radians. But please, feel free to add to the list of why radians are superior, I know there are deeper reasons. The more evidence we have the easier it’ll be to leave our childhood unit of choice behind. 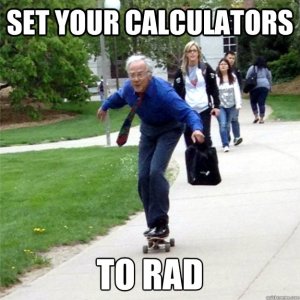